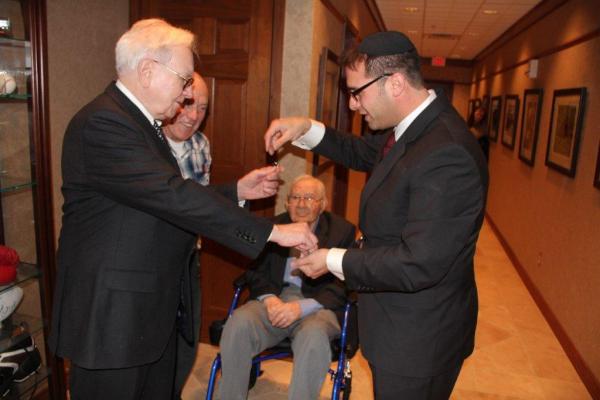 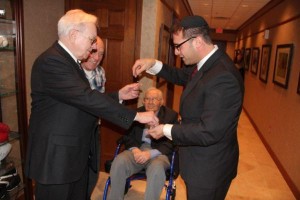 Nu, another year has come and gone and neither Eliyohu nor Moshiach made an appearance since last Pesach despite the fact that we diligently filled Eliyohu’s cup, opened the doors, sang all sorts of songs, including leshono habo b’yirusholayim (next year in Jerusalem) and invited them at last year’s seder. In fact, The Oisvorfer invited them both twice last year and in previous years, and is mamish getting fed up with these unanswered invitations. Nu, we’ll try again this year.

At the moment, the Ruv finds himself aboard Delta # 1529 en route to Las Vegas where avada the kidusha is flowing on the streets along with other liquids, if you chap. Can you think of a better place to help celebrate this spectacular yom tov and to commemorate the one single event that led to the Yiddin becoming a nation and accepting the heylige Toirah? Avada nisht! Some might klerr (think) that other yom toivim  (holidays) are more significant- say limoshol- the big ones- Roish Hashono and Yoim Kippur ober Raboyseyee,  let’s get serious: this all began with yitziyas Mitzrayim (our leaving Egypt) and the RBSO makes sure that we recall this seminal event  multiple times daily. Every move we Yiddin make, especially during davening, kiddish and elsewhere, we are reminded that the RBSO redeemed us from slavery from those Egyptian chazerrim and took us out of Mitzrayim. And avada you all recall that the Yiddin were so busy packing gold, silver and other riches including jewelry and even chastity belts, they left without having time to bake the bread. Nebech (sadly), the yeast had no time to rise and therefore it’s our duty to eat matzoh for eight days along with a few hundred pounds of other goodies, mostly though, potatoes and cake. And ever since, we celebrate Pesach with our families, even the extended one, including a few relatives we can’t stand looking at and mostly talk about behind their backs.

On Pesach night(s), we read the Haggodo, which for centuries now has   been the text through which the Yiddin have engaged in the retelling of their exodus. With the reading we fulfill the mitzvah of “Ve-higadeta le-vinca”—(“And you shall tell your son,” Shmois 13:8), and to “Remember this day that you came forth from Mitzrayim” (Shmois 13:3). It’s taka a beautiful story but two nights in a row?

Efsher you want to know who wrote this Haggodo and even if you don’t, the Oisvorfer will shed some light while the plane is shokeling like a lulav. Nu, The Haggodo is basically a collected work of prayers, brochos (blessings) and excerpts from the heylige Toirah, Mishnah, and the Midrash and was not written by one particular author. It kept growing over time and was gradually supplemented by psalms and songs. And listen to this:  The first printed version of the Haggodo was published in Guadalajara in 1482, ten years prior to the expulsion of the Yiddin from Spain. By the 16th century, there were approximately 25 printed versions; 300 years later, there were more than 1,000. Today Art Scroll alone has nearly 100 versions; of course each is sponsored by some mishpocho.  Grada the Oisvorfer’s mishpocho also sponsored one version some $75k and many years ago.

Earlier this morning, the eishes chayil biz hindred in tzvuntzig (till 120) asked if I had sold the chometz yet to which I responded that I would do so immediately. Exactly three minutes later the deed was done and efsher you’re wondering which Rabbi I appointed as my agent and slipped a few bucks to at 6:30AM. Nu, the answer is simple: I sold it on eBay.  Isn’t that where everything gets sold these days? Avada I’m just kidding…. not totally. The emes is that the Ruv did sell his chometz  online by entering into a shtikel (sham) transaction…..shhhhhhh. What’s pshat? Here’s what went down. A transaction was entered into in which he sold his chometz to an unsuspecting goy; hopefully he won’t find out, call the authorities or even worse, demand delivery. A business transaction was entered into, chometz was sold, but no chometz was delivered, nor was there a hava mina (a first thought) for such a closing to take place. . oy vey! Moreover the Ruv wasn’t paid a plug nickel for the sale.  It gets even worse- he had to pay. A shtikel donation was made to get rid of the chometz and taka why? Because of the middleman, and who might that be? Nu, for most of us, it’s our local Rabbi who has, over the past 50-100 years, set himself as an agent that arranges the sale and buyback, and for that service, he gets a shtikel vig (typically in cash) and has built a  nice little side business that flourishes once yearly and puts a few extra shekels into his pocket. And why not?  I heard a rumor that a few Rabbis use these funds for charitable purposes, others, ver veyst.  Nu, back to the sale:  As I said, money did actually change hands ober unfortunately; the seller (me) didn’t see one red cent.  In this case, the middleman got the cash. How all this works, ver veyst but when it comes to making money, don’t sell our clergy short. Though trained in the heylige Toirah, Gemora and other such subjects, business is first and foremost, and selling chometz is big business.   Not just didn’t I receive money from the sale, it cost me a few bucks. What’s pshat? Have you ever made a sale where you had to pay? Back in business 1.1, I was taught that the seller receives and the buyer pays. And is this what takes place when one sells his chometz? A nechtiger tug and fuggitabout it. Grada I can’t think of one other such lopsided transaction, and all this is somehow approved, ratified, certified and supervised by none other than our local Rabbis who have established such an amazing and givaldige business model.  Is an IPO far off? What is taka pshat?

Alts kint (as a young child), I have vivid memories of accompanying de tata (my father) to the Rebbe where de tata signed his name alongside many others, lifted the Rebbe’s dirty handkerchief, slipped him a few dollars (typically in cash) and shoin: like magic mamish- all the chometz we had in the house  was suddenly no longer ours. And then eight days later, in David Copperfield fashion, an hour or so after Yom Tov, we opened the door to the chometz closet and mamish a neys min hoshomayim (miracle from heaven) took place. The same chometz we sold to the goy for X dollars and for which we received Y dollars (Y=$0) and for which we paid the selling broker (the Rebbe) Z dollars, was there just where we left it. Nu, could there be a bigger miracle than that? Avada nisht. How did all this start and is this glatt kosher or even kosher at all? Nu, let’s see.

Ober Raboyseyee the battery on this farkakte laptop is kimat toyt (nearly dead) and you’ll read all about the selling of chometz in the next installment. Stay tuned. In the meantime, don’t forget to do bidika ad sheyodoy maseges (checking for chometz as far as your hand reaches), if you chap.