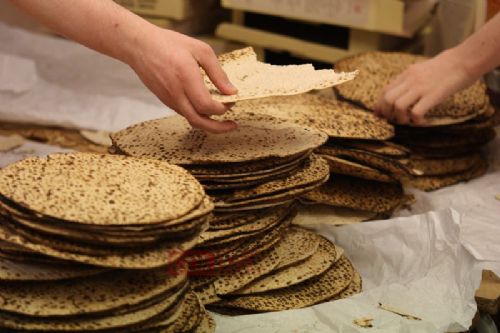 Nu, where was I? Oh yes, I was about to tell you all about mechiras Chometz: how it works, why it works and more. Lommer unfangin: it all started with a Mishne (Pesachim 2a) which discusses the inyan (topic). Ober we’ll skip that for now and begin instead with some historical background. Pesach is, after all, about history.

The practice of selling chometz to remove it from Jewish ownership on Pesach, as dictated by the RBSO, has gone through four historical stages and with the advent of the internet, we may be on the verge of witnessing a fifth. Says Reb Shlomo Yosef Zevin (Homoiadim Behalocho ch.4) azoy:  way back when, individuals taka permanently sold their chometz to goyim (gentiles) and avada this seems to be a glatt kosher way of observing this mitzvah.  Let’s call this stage one. The Yiddin weren’t too happy with this method but halocho is halocho and they kept it.

Eventually the Yiddin started acquiring more goods including spirits (read: scotch and other fine drinks) and quickly figured out that this sale before Pesach was a losing proposition and epes Pesach didn’t feel all that right when they goy was making money off their backs after the Yiddin had slaved for 400 years. What to do? Enter stage two: in this iteration of keeping Pesach correctly, the Yiddin were selling their chometz and then repurchasing it after Yom Tov.   Taka it doesn’t sound all that different than does stage one ober Raboyseyee, it is. Back then in both stages, the seller (the Yiddin) sold and delivered the sold goods to the goy. The goy paid and received goods, mamish the way a real contract should work. Ober the Yiddin soon tired of packing up and schlepping chometz to the goy’s house and then having to schlep it all home again. Besides, how can they trust that the goy didn’t dilute the scotch with some water or use our special dishes for himself for Easter meals? What to do? Introducing stage three.

In this stage, the Yiddin sold their chometz without removing it from their own homes. Yes, I sold it to you Mr. Goy but I think I’ll just hold onto it. Of course you are more than welcome to come by anytime and retrieve it, not!!    Nu, and when the Yiddin saw that this stage was working out to their advantage – no more schlepping- they went out and perfected what we now call stage four and in this stage we  authorize our local Rabbi to conduct the entire sale and repurchase the chometz  on behalf of the gantze kihila (community). As you can only imagine, each stage was quite controversial and wasn’t adapted universally, but with time each new look of chometz selling, took hold with the support of major halachic authorities who avada also enjoyed their commissions for arranging the sale/buyback. And taka why not? Isn’t life supposed to get easier?

Grada this easy form of ridding one’s house of chometz, has dominated for over a century. Individuals appoint (read: pay) their rabbi as an agent to sell the chometz. Each individual is technically the seller but the rabbi, having been empowered by you touching his dirty handkerchief or otherwise making a kinyan, if you chap, serves as an agent for many people and conducts one communal sale on behalf of all those who appointed him. Shoin, got all that? Let’s go veyter so that you amaratzim (less than neophytes) know a  shtikel more than you ever did about Pesach.

As you  can imagine these last two stages weren’t without controversy and what in our religion isn’t without some? Some people were quite upset about a sale where goods never left the possession of the seller. In other words: it doesn’t epes have the feel of a real sale. In plain English: is this efsher maybe a sham transaction? And even with money as the great driver, the fourth stage — the communal sale by the rabbi, didn’t sit well by all.  If one is not even selling the chometz directly to the poor unsuspecting goy, there is a greater chance that one (I mean you) may not really intend to sell it and that one (you) is just performing a ritual. Is this what the RBSO wants from us? Is this how we repay the RBSO for performing all these miracles for our mishpocho? Seemingly the answer is yes.

And like everything else in life, over the past decade, we have witnessed a new development —sale of our Chometz over the internet. This latest iteration entails the seller entering his/her address and other information on a web form and clicking on a button to appoint a rabbi — sometimes unspecified — as an agent to sell chometz. Without seeing or even speaking to the rabbi performing the sale, the seller is even further removed from the transaction. The seller doesn’t have to visit the Rabbi, chap him, have him chap you, do the kinyan, schmooze, wait on line, make small talk and, above all, hand over large sums of money, typically in a white envelope. Does this work? Seemingly yes and many are quite happy bit zicher not all Rabbis. And avada now you can chap why Rabbis are trying to ban the gantze internet. They don’t care about bochurim  (young teenagers) watching naketa mydlich (naked girls) or that the boys and girls are ichatting, bbming, sending tantalizing messages and otherwise hooking up: what they do care about is profits and internet sales of chometz are zicher and avada cutting into their profits. And when it comes to putting your hands into the Rabbi’s pockets, you can rest assured that somewhere a plot is unfolding to find a halachic reason to ban the gantze farshtunkine and tumidikke Internet. On the other hand, some Rabbis I knew growing up, didn’t at all mind sticking their hand into our pockets, if you chap- which they did, nebech.

And taka how does the Internet sale take place?  Is this sale kosher: nu, let’s see. Says the Shulchan Oruch, Choishen Mishpat 182:1 azoy: Technically, one may appoint an agent merely by stating that you are appointing him. Ober says the RambaM (Mishneh Toirah, Hilchos Mechirah 5:12-13): that there’s taka a minhag (custom)  to solidify an appointment of an agent by making a kinyan sudar, performing a symbolic act of acquisition which demonstrates the transfer of authority. As we stated above, typically this was accomplished by lifting the Rabbis handkerchief or pen and telling the Rabbi that you were appointing him. Nowadays, a few contemporary Rabbis have introduced new and fun items to hold, each meant to convey the spirit of  you, the seller appointing the Rabbi as your agent to conduct this so called sale where nothing ever leaves your possession except the cash that does leave your hands and never comes back. Ober says the Rambam: this ceremonial lifting does make clear that you truly want to appoint this agent to act on your behalf. One can also just lift his/her laptop and ceremoniously appoint the internet Rabbi through this new type of Kinyan.

The bottom line: you appoint an agent, you make the sale, the goods never leave your home, you don’t get paid but the agent makes out well.