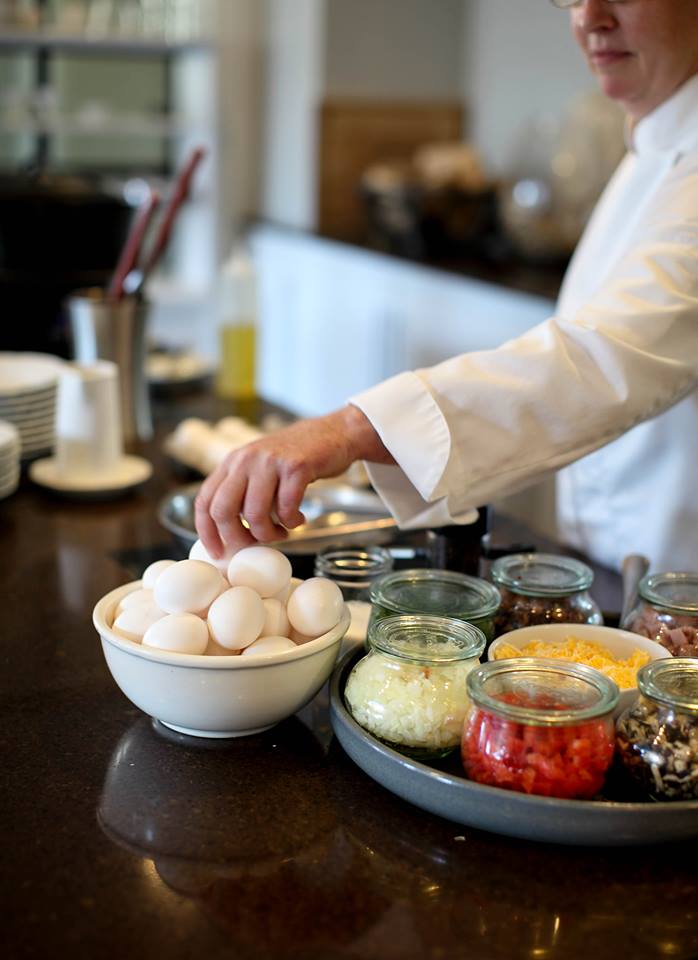 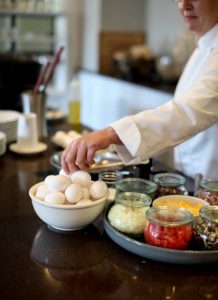 The Omelet Station vs. the RBSO

Let’s begin by thanking the many many readers who sent in warm Pesach wishes along with other more personal messages, if you chap, and a few interesting comments. Grada, the Oisvorfer was klerring (contemplating) to refrain from writing during Chol Hamoid (intermediary days of the holiday). Zicher you know, that according to some and especially the chasiddim, the days of Chol Hamoid are also mamish part of the Yom Tov, and if one cannot write on Yom Tov, efsher it’s shayich (logical) that one should not be writing on Chol Hamoid. Ober, as with other halochois and minhogim (laws and customs) in our beautiful religion -a number of which were enacted by some fellow named Hillel about whom we will have more to say in the coming weeks- there had to be a workaround, a loophole. Shoin, the Oisvorfer was klerring azoy: given that he will only be stroking the keyboard, if you chap, and will not be utilizing his pencil, or any lead for that matter, if you chap, efsher this might be considered a shtikel loophole that would allow him to write yet not really write on Chol Hamoid.  And avada we all know that when it comes to proper Pesach observance, the selling and buying back of one’s chometz (leavened products), and myriad other examples, the concept of the loophole comes to mind. Shoin, the Oisvorfer decided to be meykel (lenient) and here we are. Moreover, he wanted mamish to feel connected to his loyal readers no matter where they and he, if you chap, are this Pesach. Grada, one reader’s comment was seeking clarity on two Pesach related issues that are mamish bothering him; both deserve answers. Ober, a myseh (story) that unfolded these last few days trumped his questions. We will get to them immediately after Pesach.

Those who are away at one of the myriad hotels that are kosher for Pesach, or, have previously enjoyed the hotel experience over the Pesach Yom Tov, avada know that every program -from the most upscale to the most economical- have this one thing in common: we speak avada of the ubiquitous omelet stations. These stations are mamish a study in sociology and human behavior where one can mamish observe people at their best and worst. The power and allure of the omelet is mamish bewildering. At these stations, hotel guests, from the youngest in the family to mature adults in their seventies and eighties eagerly stand on line for an egg, two, or three. So happens that the egg is an item which costs the tour operator approximately twenty cents. They wait patiently for the goy to make each guest his/her preferred omelet of choice.  Interestingly enough, while most choose to wait on line, one can avada find pans full of scrambled eggs and at some programs, pans of ready-made omelets where the wait time is zero.  Are people availing themselves of these ready-made and ready to eat omelets?  Not! It’s mamish bizarre.

Why do hotel guests that spend many thousands to be away over Pesach do this? Ver veyst? Why do otherwise sane people stand on line for twenty or more minutes for a farkakte omelet, ver veyst? Would you wait 20 or 30 minutes for an omelet at a diner, restaurant, or even in your own home? Of course not! You would zicher walk out in disgust and swear never to return. Yet, when it comes to an omelet over Pesach, efsher the most basic and economical food item on the entire food chain, people line up with at least one plate – usually more- and wait as if the omelet were made of some special super food and gave one special powers. So popular are these stations that a few programs feature the omelet stations at the lunch meal as well and guess what? They are just as crowded. Why? Ver veyst! For reasons that remain inexplicable mamish, if the omelet station is open, people will be there waiting. Lines at omelet stations have been known to form while the short order chef is still in his room and in his gatchkis (underwear). Moreover, a healthy number of those crowding the lunchtime omelet station, will have eaten an omelet for breakfast.  People love their omelets. 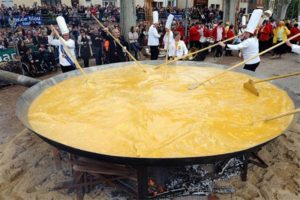 Over the years the Oisvorfer has witnessed unruly behavior by adults and even kids as they stand in wait for their omelets. If one wouldn’t know better, one might think that waiting on the omelet line is a Pesach requirement so declared by our Sages.  Is it?  Not!  It’s but an omelet!  Ober try convincing the many who willingly stand in wait for a few eggs, topped with or filled with whatever tickles one’s fancy.

There are certainly many omelet stories to share; over the years, many of you have been witness to something unique on these lines and this year, over at the program where the Oisvorfer finds himself this Pesach, one incident to which he was an eye witness prompted this short missive. So happens that the heylige Oisvorfer was sitting, if you chap, a few feet mamish from the omelet station. It also so happens that one of the Pesach guests had never before experienced a Pesach away. This particular guest, while Jewish from birth, was not very observant, knowing only customs he had seen at home over in Uzbekistan. Ober, in recent years, as he stated, he had found the RBSO. He davens (prays) daily with some fervor – more than most – and appears sincere mamish. His kippa is quite large and though his background is limited, his heart and emotions all exude a true love for the RBSO. He believes mamish as do many of the Bucharian Yiddin. And he prays daily at the very same time. Ober, as stated above, he had never experienced the Pesach omelet station. By chance, breakfast was scheduled so that it coincided with his daily praying regimen. He need to make a choice. Daven first and then chap an omelet, or, chap the omelet and some nourishment first and then daven to the RBSO. He chose the latter; let’s recall that he was mesmerized by the entire station.

And so taken was he and so desirous of having his own custom made omelet, he stood there and watched as every guest ordered and received theirs. Patiently he waited until it was his turn which was last. And when his was ready, he savored each bite. He enjoyed as if he were eating the finest cut of meat. He could not believe that Pesach observance included freshly and custom made omelets. He would not leave the breakfast room. Shoin, when the Oisvorfer saw him a bit later that day and asked him if he remembered to daven to the RBSO, he admitted that he had forgotten. He felt badly and stated that he would say a few words of prayer. But did he and what happened next? 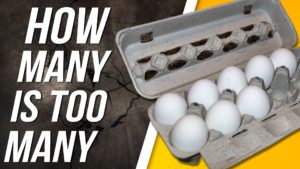 On the second day, there he was back at breakfast where the omelets were already being cooked up. Again he sat there and did not leave the room until breakfast was over and the station was being broken down. He enjoyed a four-egg omelet with veggies and other trimmings including cream cheese. He was in heaven mamish. Later that day I half jokingly asked if he remembered to recite tifilat-shachrit (morning prayer). Again he looked at me and admitted he had forgotten. Again, his desire for beytzim (eggs) overtook him.  Shoin, when beytzim are involved, people do lose their heads and forget things, if you chap.  I teased him mercilessly about how he had forsaken the RBSO on two consecutive days for a few eggs.

On the third day he was a no-show to breakfast. When I inquired as to his whereabouts, I was told that he woke up with a rash covering his entire body. The RBSO had spoken! And instead of breakfast, he was now in need of medical attention. He was totally spooked and was questioning whether or not the Oisvorfer had put a hex on him. Shoin, if only such powers were available…. He found a doctor who administered a shot of Benadryl and by dinner time he was mostly healed and looking forward to his next omelet on day four.  Later on day four, while discussing the entire incident, he told me azoy: “When I noticed the rash all over my body, I apologized to Hashem and said I did bad. I told Hashem that if He would remove my rash within a day or two, that I would not again forget to daven shachrit (morning prayer).  I felt that Hashem is close to me, He was talking to me.” Shoin, his message must have gotten through because the Benadryl shot and the Prednisone pills that he must swallow for the next few days were but messengers of the RBSO.  On day four, when I arrived to breakfast, there he was with a mouthful of omelet.  Ober on this day, following breakfast, he did remember to daven.

Unlike many a medrish quoted from time to time in Oisvorfer reviews, this myseh (story) is 100% emes.

A gittin Shabbis and Yom Tov