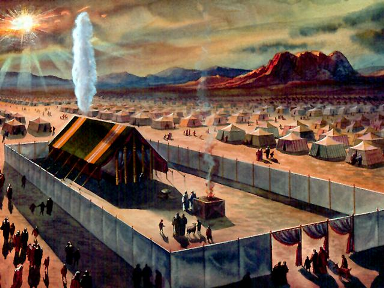 Just last shabbis, three months back in Toirah time, we discussed in depth mamish, how the heylige and dedicated froyin (ladies) came forward with great enthusiasm and donated among other items, their kumozim, or as chaver Jay might spell it, kumazim, to the Mishkan project. That’s what the heylige Toirah told us. Avada you will recall that some identified the kumoz as a chastity belt while others, as some other form of cover or protection for the lower, south of the border region, if you chap.  Guess what? Maybe it wasn’t the best idea for the women to part with these devices and this week we will see what might have happened next…will we ever.

Shoin, how does one introduce a potential scandal into this week’s parsha especially so if one does not find any such discussion in the text?  Even Rashi who seemed to have known all the local loshoin horo, makes no mention of one. It’s yet another parsha where Rashi has little to say; he has previously pontificated on the guts of the Mishkan project in parshas past. And how does one interject a few salacious details where none exist in the script? Not to worry: leave it to the medrish and heylige Gemora to come up with the juice. And that raboyseyee is the beautiful part of the heylige Gemora; anything can be discussed and the topics, no matter how sensual or sexual, are glatt kosher. Is it a wonder that some are perpetual students? Givaldig!

Parshas Pikuday marks the end and draws the curtain down not just on the Mishkan project which we have been discussing these last five parshas -that’s five of eleven parshas in the entire good book of Shemois- it also closes out the entire sefer of Shemois. By this time next week, we will be reading all about korbonis (sacrifices) that seem to harken all the way back to Odom (Adam) Horishoin and the original sin. Speaking of Odom, Chava and their big misdeed over in Gan Eden (paradise), one medrish will tell us azoy: for their grievous sin of partaking of forbidden fruit, they were afflicted with thirty-nine different types of punishments. What those were, ver veyst? Imagine what’s in store for many of you that partake of  forbidden fruit more regularly, chazerim that you are.  Where will we come across that number thirty nine again and how is this relevant to our parsha review?  Says the Be’er Mayim Chaim, whose descendants later created a line of kosher soda azoy: the number thirty-nine is connected to the Mishkan project where seemingly thirty nine different types of works (milochos) were required during its construction.  Hocking, klopping, weaving, sewing to name a few. These same thirty nine are forever forbidden on the heylige shabbis. And? Shoin: seemingly the thirty nine milochos we do during the week are efsher still part of the curse of Odom. In other words: all labor is a curse and had Odom not sinned, the RBSO would have taken care of all our needs without us having to work.  And that’s why the six days of the week are taka referred to as ‘yimay hama’seh’ (days of activity). Our daily work serves as some form of rectification for that very first sin. Shoin, the connection is made. Odom and Chava committed one little sin; they chapped forbidden fruit. Ever since, man is relegated to a six day work week. Efsher it’s taka better to sit in yeshiva and learn, ver veyst. In any event, exactly how these initial thirty nine shabbis restrictions morphed and have grown to several thousand over the generations (with many more to come from the next set of Taliban inspired rabbis), ver veyst.  Shoin, let’s stay focused. 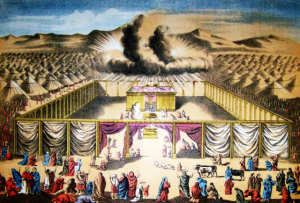 Parshas Pikuday describes again in glorious detail how the entire project came together and how the Yiddin, or those in charge, built and assembled all the Mishkan’s parts and craftily designed and then supervised the sewing and tailoring of the entire line of Bigday Kihuna (Priestly vestments). From the breath if its coverage, it’s mamish clear that the three major themes of this entire sefer are: Yitziyas Mitzrayim (Exodus), Matan Toirah (Revelation), and the Mishkan construction project. The sanctuary was built to house the RBSO’s essence and glory, whatever that means. We’re talking holy concepts. Exactly how some little box could house the RBSO, ver veyst? Ober if the RBSO said to build it and that He would then dwell amongst the Yiddin, of course it all made sense. Our good rabbis, those we affectionately refer to as ‘Chazal’ tell us azoy: so holy was this Mishkan that it was never destroyed. Let’s recall that the two Batei Mikdash (First and Second Temples) built in later times, were both destroyed. Where is the original midbar Mishkan? Ver veyst? Seemingly the RBSO hid it; maybe we will see it again one day. Surprisingly no one has (yet) laid claim to its discovery, nor built a tourist attraction for its viewing. Avada were this to happen, few would be surprised. In any event, the Yiddin did an excellent job following orders to construct it and we know this because the heylige Toirah will make mention -many times- of this fact and how they followed orders to perfection. Say the Ba’al Haturim: it will be mentioned no fewer than eighteen times. Some say nineteen. Avada we don’t ever expect all the rabbis to agree on any given number. Why all this praise and adulation, ver veyst? Mistama they needed encouragement along the way. Paying a few compliments for a job well done is always a good idea and an excellent management tool. Some say it also works at home with the eishes chayil. Of course, not everyone agrees.

Unfortunately, one will be hard pressed to find another time in Jewish history when the Yiddin did exactly what was commanded of them. Usually it was farkert (opposite) and that’s why, the RBSO gave us korbonis (sacrifices). It’ s also why He will, as the parshas roll along, be disposing of many thousands that will anger Him. It’s not good to anger the RBSO. Certain sins bring instant death. Ober es veyst zich ois (apparently) azoy: though the Yiddin were taka building everything to code and according to the instructions the RBSO gave over to Moishe a few parshas back, not everything was in order. What was looming in the background was mamish scandalous. What do the medrish and heylige Gemora tell us took place mamish just as the project, the very one built to atone for the sin of the eygel hazohov (golden calf), was drawing to a close? What last minute snafu unfolded mamish as the time was nearing for the grand inaugural of the Mishkan? Better you shouldn’t know, hear or even read, ober, it appears that the heylige Gemora and a few medroshim wanted us to know the following. 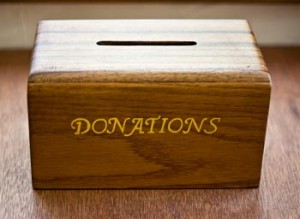 Moishe was under suspicion. For what? The medrish (Tanchuma) will tell us for embezzlement, for having sticky fingers, for efsher lining his pockets with some silver and maybe a few other goodies. A few were leveling accusations. The heylige Gemora’s (Sanhedrin 110A) version is much worse and tells a more shrekliche (horrific) story. What could be worse? If it were any of you! Beyond being suspected of lining his pockets, some suspected him of adultery. Moishe? The same Moishe who mamish sacrificed so much to lead the Yiddin out of Mitzrayim, the one that spent 40 days alone with the RBSO atop the mountain where he neither ate nor drank – more than once- was suddenly a suspect? Moishe? Oy vey!

Shoin, the Gemora will introduce, out of left field mamish, a shocking scandal involving Moishe and a number of married women. Say that again and say it’s not so please! Ober it’s taka emes: the heylige Gemora will tell us that some accused Moishe of infidelity, of cheating on his eshes chayil Tzipoirah, of efsher being mezanah (having relations) with married women. More than one! Oy vey! Were these efsher the same women who mamish -one parsha back- donated their kumozim and were mamish left without protection? Is that why Moishe accepted them? OMG! Just a thought. Oy vey iz mir? Who were these people and how did they have the temerity to accuse Moishe -the same person that was chastised by his sister Miriam for separating from his own wife for reasons he deemed holy- of infidelity with others? Shoin, we’ll get more into that in Sefer Bamidbar when we meet Koirach and his clan, ober that’s what the heylige Gemora tells us the charges were. Avada the charges were false! Shoin: there are people -sadly many- that love to start rumors, mamish out of jealousy. That’s how it was back then; not much has changed. 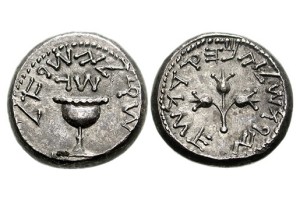 Ober how could Moishe, the true Eved Hashem (the RBSO’s trusted servant) taka be involved in a scandal of this magnitude? And was he? Of course not! As to why a few Yiddin would level such accusations, shoin, the story unfolds in our parsha where the opening words and verse tells us that Moishe gave an accounting, the very definition of the word Pikuday.  Shoin, Moishe was already in his eighties and mistama suffering from STML (short term memory loss), which grada sets in a few decades earlier.  Unless of course you owe your chaver money; in that case it has been known and is proven mamish, to set in on or around the due date of the loan.  Yikes!  As a result of his STML, he temporarily forgot what he had done with a tiny portion of the silver that was collected. He later recalled how the silver was used to make hooks that held up the curtains. Shoin: In the interim, a few decided that Moishe must have lined his pockets, a scandal was born. What to do? Moishe gave an accounting and also brought in the auditors.

Shoin, though all Moishe initially had in mind was to balance the books of donations received, he did inspire many thousands of young Jewish kids to take up accounting. Mistama that too was an objective. Let’s not forget: a careful reading of the heylige Toirah has inspired countless ‘Toirah inspired entrepreneurs’. The RBSO and seemingly even Moishe were thinking ahead and chapped that not every Jewish kid was going to be accepted into medical or law school. Bottom line: a few who were jealous and mistama also weak math students, started the rumors that Moishe was a gonif, a crook and also efsher a cheater. The good news: the RBSO Himself came to Moishe’s defense when He in the heylige Toirah (Bamidbar 12:7) stated azoy and listen to these words carefully. “This is not true of My servant Moishe who is the most faithful of all in My house.” Shoin, if the RBSO says Moishe was faithful, mistama He meant faithful mamish; who was going to argue?  In addition to the RBSO’s givaldige reference, Moishe still gave a full accounting. And when the RBSO decided to vouch for Moishe by stating that Moishe was “the most faithful”, let’s keep in mind that while the Yiddin were sojourning in the midbar for forty years, there were many men that were not at all faithful, if you chap. We will be reading about them in the coming weeks and months.

Chazak, chazak, vinischazake: We have now completed the good book of Exodus for a sixth time.