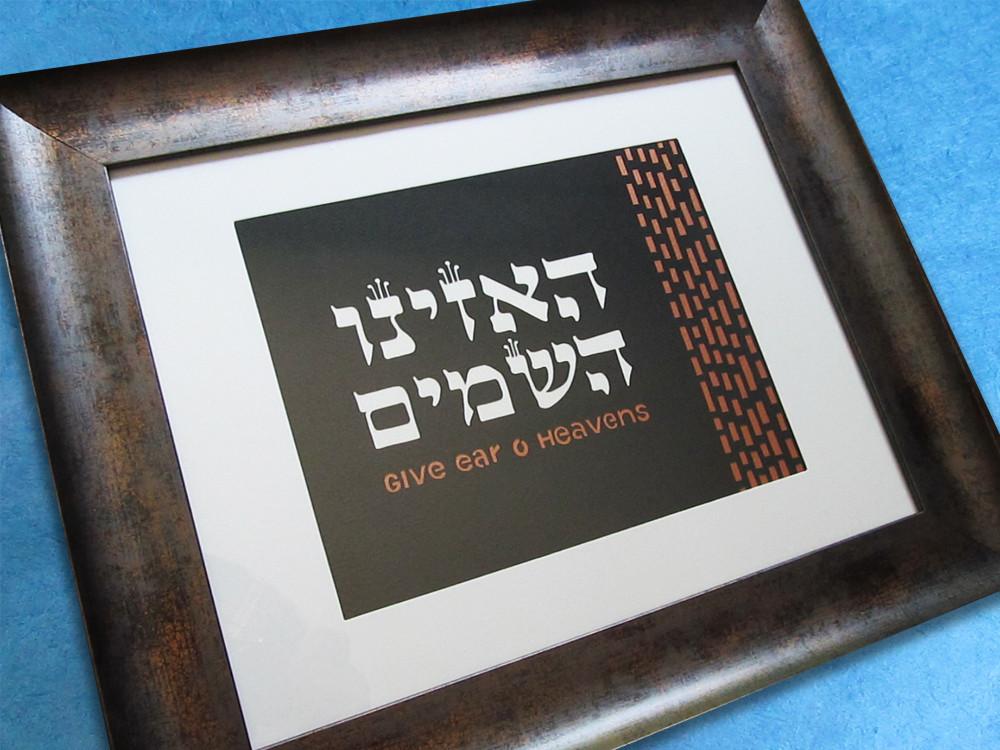 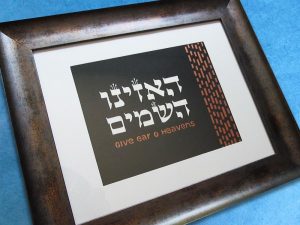 Nu, after a short two day break to cleanse ourselves for the myriad sins we committed in the past year –Yom Kippur does that- the heylige shabbis is here again, and this week, we’ll have the pleasure mamish, of hearing Parshas Ha’azinu (which means “listen”). Ha’azinu, with its 52 pisukim is the 3rd shortest parsha, a relief mamish after a long and kimat all day event on Yom Kippur. Ha’azinu and the last parsha in the Toirah –V’zois Habrocho which we’ll hear on Simchas Toirah, contain Moishe’s last words to the Yiddin before the RBSO carries out His sentence of not allowing Moishe to lead the Yiddin into the Promised Land. Seemingly it’s not a very good idea to anger the RBSO: He has a long memory especially for tzadikim (righteous) that make tiny errors of judgment. Avada that’s more than givaldige news and a great relief to most of you; we are taught that the RBSO punishes those good guys for the tiniest of infractions. Avada that brings up the very famous Talmudic expression of “Tzadik V’rah loi (loose translation: at least at times, righteous people have it bad, meaning they are seemingly not rewarded –in this world- for their exemplary behavior). Many pages have been written by dozens of commentators and exegetes trying to understand why the RBSO runs the world as He does, ober, this topic for another day. The bottom line: it’s none of our business. Does it pay to be good? Ver veyst?! Ober how did Moishe act in his final moments? 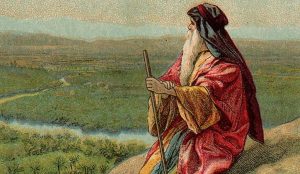 Ha’azinu consists almost completely of one long song or poem. Is the heylige Toirah a song book? Seemingly parts of it are. Songs, tunes, and singing also play a significant part of our shabbis and Yom Tov (holiday) liturgy. If the chazzan doesn’t sing the right tunes, sings off key, or does not sing them correctly, he will be bad-mouthed all year long, including on Yom Kippur itself. Oy vey! Ober, what role do songs play in the heylige Toirah? As it turns out, “Shiras Ha’azinu” is but one of five ‘songs’ found in the heylige Toirah and Tanach. Even those who weren’t paying attention while in yeshiva, avada know that Moishe originally burst into song just as the Yiddin -having been released from slavery- crossed the sea. He put out his still famous Oz Yoshir single as recounted in Shemois 15: 1-19. For that song, he was seemingly accompanied by an all male choir. As the lyrics tells us “Oz Yoshir Moishe, U’vnei Yisroel (then Moishe sang along with the Yiddin: avada males only). As an aside, the first ever women’s single featured Moishe’s sister, Miriam, and immediately followed the Oz Yoshir. Was she the first feminist? For some reason, her song does not count as one of the five. Shoin! The next song is found in our parsha and is, as mentioned above, Moishe’s swan song; he will be passing away later that day. Seemingly it was a killer song! Ober the music did not stop and the heylige Novee will record three more songs. Each is known for the artist who composed it, and they are: “Shiras Yehoishua” found in the Novee (Yihoishua 12:1-24); “Shiras Devoirah” (Shoiftim 5:1-31) and “Shiras Dovid” found in (Shmuel II 22:1-51).

And how do we know these are songs vs. regular exchanges or speeches? And the answer is quite simple: A ‘song’ is defined as a parsha in the heylige Toirah or Novee which is written in a unique and special pattern. When you see it, you know it! 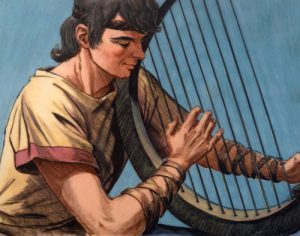 Why would Moishe, knowing he’s minutes, or even hours from passing away, be singing? Ver veyst! Avada it’s easy to chap why one or more would break into song having participated in, or even witnessed a miraculous event. Splitting of the sea was certainly a great neys (miracle). Ober, having the ability to sing in the face of adversity is seemingly what separates regular joe’s from greatness; Moishe was taka great. And so was Dovid Hamelech (King David) whose ability to sing despite personal tragedy which would have broken the spirits of lesser men, was mamish inspirational. Instead of avoiding the painful topic, Moishe addressed it head-on, displaying absolute acceptance of the RBSO’s will. Dovid sang when escaping from his own son who was attempting to usurp his power (also to kill him). The bottom line: Yiddin love to sing, it’s part of our fabric. In fact, our weekly parshas and the Novee come with cantilations which produce various sounds depending on when they are being read. Each sets the proper mood. Mistama the RBSO likes to hear us daven and to read the heylige Toirah with some melody. Ober does everyone agree that there are but five songs in the heylige Toirah and Novee? Of course not! According to other sources, there are ten. We shall cover these on another occasion.

In any event, as he is about to pass, Moishe offers a poetic presentation of the history of the rocky relationship between the Yiddin and the RBSO and his perspective on the future.  It’s not all that pleasant. The words in Ha’azinu are shver (difficult) mamish, even for the few of you who can learn some basic Chumish without having to resort to the English translation. It’s not easy to chap the exact sense of the words, they are written in a highly literary, and often obscure style and some taka wonder what suddenly got into Moishe on this, the last day of his life. If any of you are serious about understanding this seminal poem, you’ll have to read it very closely, examine the imagery, get a sense of the structure, fall asleep, and after a few hours, try again. Good luck!

Asks Rav Levi Yitzchok of Berditchev azoy: why, at the end of his life and the end of the Toirah, did Moishe suddenly depart from the prose style which he had used for most of his life and speak instead, in verse? Not just does he ask this kasha but he also offers an explanation that were anyone else to suggest it, zicher that person would be placed into cherim (excommunicated). 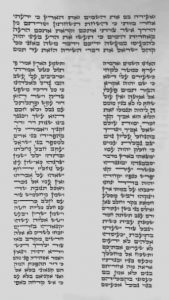 Say the good Rav Levi Yitzchok, that on this day, Moishe’s last, he was weak and tired and zicher neither the man nor the Novee (prophet) he had once been. Moishe was therefore forced to abandon the clear, direct, precise, and readily understandable prose style which he employed for most of his career and lapsed, instead, into an obtuse, allusive, stylized and difficult-to-chap poetic style. What all that means, the Oisvorfer has no clue ober continues Rav Levi Yitzchok: the poetic material which Moishe sang out at the end of his life does not constitute a crowning artistic achievement but, rather, a falling off of his powers of communication, a lapse, brought on by his advanced age, failing powers, and impending death. Yikes! Could this be pshat?

Bikitzur (in short), Moishe predicts with 100% accuracy how the RBSO and the Yiddin will treat each other in the future, it’s not a very pleasant picture. Says Moishe: the Yiddin, as they have done in the past, will abandon the RBSO in their illusory sense of affluence and security. The Yiddin will become comfortable in the land, build their homes, grow rich, and spurn the RBSO. Sound epes familiar? Oy vey!

The RBSO will zicher get very upset with His Chosen People, punish us severely –as He has- ober in the end, He will not completely and utterly destroy them.  Moishe predicts that the RBSO will avada save the Yiddin, but not on account of their good deeds; rather because He has a larger agenda.  Thankfully, the other nations are much worse, mamish. Compared to them, the Yiddin were, and remain, nisht azoy giferlich (not all that terrible). Everything is relative. We remain a tough bunch of survivors.

As Ha’zenu closes out, the RBSO commands Moishe to ascend Har Nevo to view the land one last time and then pass away. The RBSO again reminds Moishe that because of his shtekin abuse, the incident where Moishe improperly used or abused his staff, he will not be permitted to actually enter the Promised Land. Over three thousand years later, the statute of limitations has been extended on those who preyed on others with theirs.