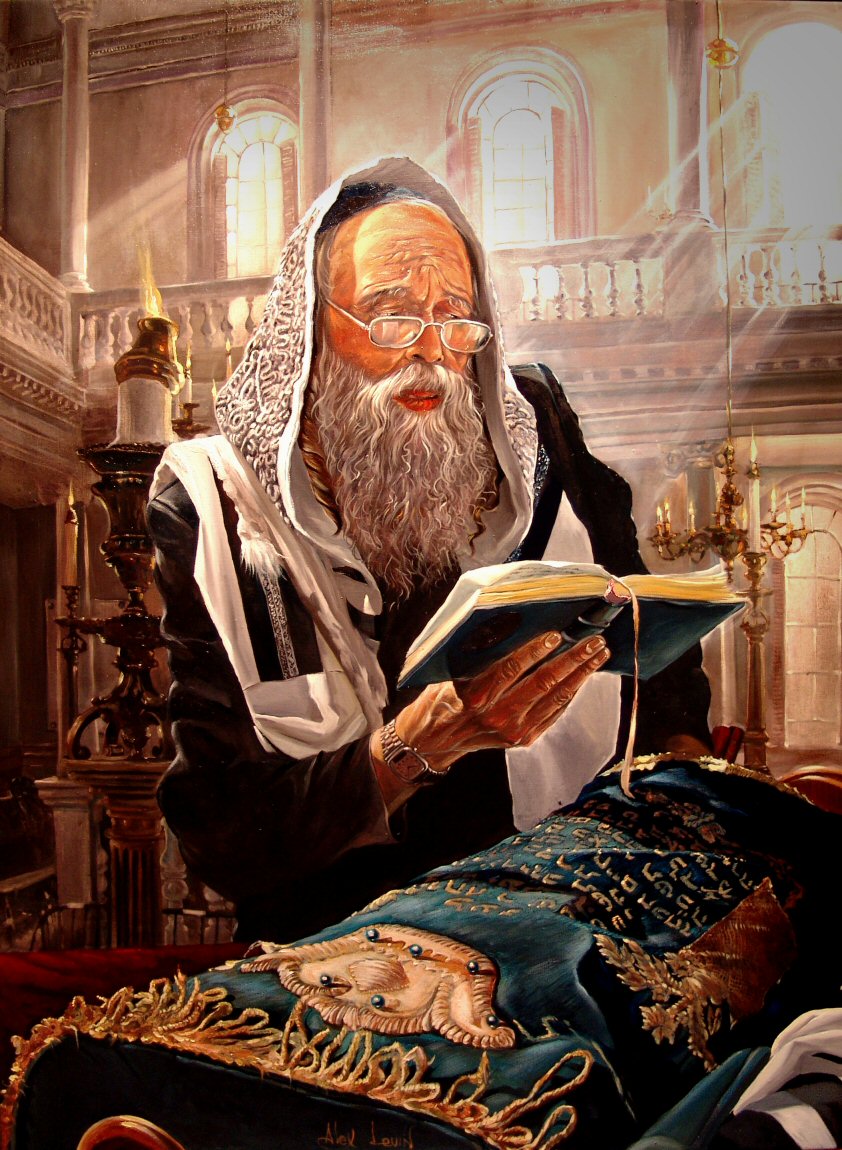 Shoin, if our moods aren’t dour enough because of ongoing events in Israel, this past Monday we marked the month of Ov, the saddest of all the months in the Hebrew calendar. Says the Mishnah Birura that when the month of Av or Ov enters, we are to lessen our joy.

In any event……….Choidesh Ov is here, shabbis Chazon, so named because the first word of this week’s haftorah begins with the word Chazon, is here and Tisha Be’ov is just around the corner. They all remind us of calamites and worse that befell the Yiddin. And the next few months don’t get any easier. Ellul soon follows. That’s the month we are to begin introspection and start getting ready to apologize to the RBSO for yet another year of broken promises and bad behavior. The rabbis will certainly lay on the guilt and do their best to have you believe that you can repent by making a sizable donation to your local shul. Can we buy our way out? Does the RBSO take cash? Luckily, Tishrei will follow with Yom Kippur and another chance to wipe the slate clean. Of course you will need to buy a seat in shul to attend the service.

On a happier note, as we go to press this week we have come to the end of year seven (OMG!) of the Oisvorfer’s weekly parsha review. And from one reader, then two, to hundreds of thousands around the globe, mamish, the list grows weekly.  That list includes those who choose to receive the weekly Toirah via email, via Facebook shares, from other mediums, through other sites that link up and offer it to their membership, and bierech (roughly) 85,000 plus/minus a few who visit the site every Friday. It does not include those who forward to friends and those who print multiple copies and hand them out. They are mamish marbitzay (spreading) the Toirah. It’s quite overwhelming. Should we do it again? Is it time to start repeating the older versions? Hey, Moishe repeated and taka in this week’s parsha and in most of Sefer Devorim, Moishe will repeat history and many, but not all, the mitzvois we have been covering since Bireshis. He does what?

Avada you recall learning that Sefer Devorim is also called Mishneh Toirah (repetition of the Toirah). Repeating? Ober weren’t we taught over and again and didn’t we discuss this very topic in recent weeks? How many times need you be told that the heylige Toirah doesn’t repeat itself? Fartig!   We were also taught that not one word is extra, not even one letter. What’s pshat that Devorim is a repetition?  Could we have gotten away with four books instead of five? Guess what? No lesser a Toirah giant than the Ramban (introduction to sefer Devorim) asks azoy: Why is it necessary to repeat all the laws in the Toirah? They were already taught in the first four seforim.  Ober since he was the Ramban, he also proffered an answer. Let’s examine it.

Ober ershtens, let’s set the scene.  It is -according to many- the 1st day of choidesh Shevat in the year 2488. Forty year of midbar valgering, as recounted in last week’s parsha of Massei, are coming to an end. So is Moishe’s life.  Moishe is near death, the entire Sefer Devorim takes place over the last five weeks of his life. Some (Sifri) say 36 days. He’s got lots on his mind and on his lips; he’s talking! Is this the same Moishe that only 40 years earlier tried declining the RBSO’s invitation for him to lead the Yiddin out of Mitzrayim? Is this the same person who claimed to be “heavy of mouth and heavy of tongue” (Shmois: 4:10)? Said Moishe then ‘loi ish devarim onoichi’ (I am not a man of words), I’m not much of an orator. It is. Shoin, let’s cut him some slack; it could zicher be the case that Moishe was left speechless when he encountered the burning bush. Wouldn’t you, if you chap?  In sefer Devorim, he does virtually all the talking. Moishe pontificates in the form of several long speeches during which he will also remind the Yiddin about their bad behavior during the past 40 years. One Medrish will tell us that he delivered his speech in 70 different languages. On the other hand, he will teach a few, some say as many as 100 new mitzvois. Some were quite interesting.

Back to the question of why Moishe felt compelled in Sefer Devorim, to repeat good chunks of Jewish history and many of the mitzvois previously given. The  Yiddin, after 40 years of valgering, were poised  to enter the Promised Land  where they would be implementing the numerous mitzvois they had received back on Har Sinai. Moishe felt the need to review, to clarify and to encourage and charge them to be zealous in fulfilling the laws. Moreover, this generation of Yiddin, those selected to make it into the land, were not yet born when the heylige Toirah was given 40 years earlier. Ober weren’t we also taught  that all Yiddin, even those not yet born, were on Har Sinai to receive the Toirah? Of course we were. Ober relax, that’s just a Medrish which does not necessarily reconcile with the Ramban’s view. Who says every medrish has to be true? In any event, these newcomers, efsher because they were not direct recipients of the heylige Toirah, had questions on its observance. Moishe spent his last days and weeks repeating a good number of  the laws, though as we will soon see, not always exactly as originally taught.  And as stated above, he also taught a healthy number of new ones.

Moishe taught a new version of the same laws? Seemingly, as we make our way through Sefer Devorim, we will encounter at least  several instances where the parsha contradicts material recounted elsewhere in the heylige Toirah. How are we to chap and understand these contradictions?  Ober not to worry, it all makes sense and it all taka comes down to the repetition of certain words, history and mitzvois. Of course we chap that that material does not appear twice in the heylige Toirah stam azoy  for the sake of repetition. Therefore, if something is taka repeated, if the RBSO saw fit to have Moishe repeat certain ideas, avada there was a reason and it’s  our job while learning the parsha, to figure it all out. It appears then that the subtle differences in the wording point to a new twist or angle. In other words, we have to see what lies beneath the surface of the text.  And this, Raboyseyee, is what the Medrish is all about; each author analyzing the original words, the new version and then figuring out why each letter, word, mitzvah or thought was told. It’s  what the medrish is built on.

Some say that contradictions in the verbiage can be reconciled by accepting the idea of multiple authors of the biblical text. The RBSO did not write all five of the heylige seforim that make up the Toirah? Nu, believe it or not, though this was never taught in yeshiva, there are legitimate sources who taka suggest just that. And says Nechomo Leibowitz: Moishe  was working as an interpreter of the events that had previously occurred in the biblical text. In the previous books, Moishe, while recording all that the RBSO told him, was acting as the historian. In Devorim he repeats much of what he learned and added new laws not previously covered in the text.

He taught new ones? Ober didn’t we Yiddin receive all of them 40 years earlier on Har Sinai? What’s pshat that he taught new ones and that we will study them as we make our way through sefer Devorim? Can both be emes? Of course they can, you just need to want to chap that the question is legitimate and that many proffer answers; you need to run with the one that talks to you. If none are acceptable, you remain an Oisvorf bum and need to start the tshuva process immediately. You could, of course, send a big check to the Oisvorfer who will have you in mind when he does his own tshuva.

And taka Sefer Devorim is chock full of very interesting mitzvois, some of which are mamish noigayah (relevant) daily. Others, not so much. We will learn about divorce, how to behave when one goes to war and strongly desires a hot shiksa whom he takes captive – surely you won’t want to miss that chapter- and of course we will learn all about Yibum (Levirate marriage), false witnesses and many others.  Nu, just about now efsher you’re wondering azoy: if many new mitzvois will be introduced, why is   Devorim called a repetition? Or, efsher you’re wondering why the new ones didn’t make it into the first four books? Or, efsher you’re wondering azoy: if the RBSO taught Moishe the entire Toirah when  he, Moishe,  was on the mountain, why did Moishe leave these out and only now, in the last few weeks of his life, decide to teach them? And taka asks the Abarbanel azoy: If Moishe knew all the laws in the first year following  the Exodus, how could he withhold the knowledge from the nation for 39 years? Mamish givaldige kashis (questions).

Are there answers? Of course? Will they satisfy you?  Ver veyst. Ober says the Ramban mamish so gishmak azoy: The new mitzvois taught in book #5 applied only in the land of Israel and were about to become relevant. There was no need for the Yiddin to learn them earlier. It was a timing issue.

Is that so and emes?  Weren’t we taught many mitzvois earlier that apply only to the Land? Aren’t korbonois (sacrifices) which are the subject matter of the first few parshas in sefer Vayikro, only brought in the land? Is divorce relevant only in the land? Shoin, so far we have many questions and few answers. Moreover, didn’t we learn all about the laws of Shmittah and Yoivel which apply only in the land of Israel at the very end of  Sefer Vayikro? How could the Ramban say that these laws were first taught  here in  Devorim because they’re limited to the land of Israel? Seemingly there were many that were limited to the Land  and yet taught previously.

Ober says the Ramban mamish so gishmak azoy:  the “new” laws we will learn in sefer Devorim are not new at all. They are only new in terms of being reduced to writing. What’s pshat? It’s taka emes that all the mitzvois  were taught and perhaps also implemented by the nation in the previous 39 years in the desert. However, the RBSO in His magnificence, determined that certain mitzvois  should not be reduced to writing until sefer Devorim. Why? Ver veyst?  In other words:  the fact that we first encounter the mitzvah now (here in Devorim) doesn’t mean that it was taught at that particular point in time.

A second answer offered by the Ramban goes like this: pick the one you like best.   Moishe couldn’t teach the nation the entire Toirah at one time; he did it gradually.  And with the Yiddin getting ready to cross the Jordan and knowing that he wasn’t accompanying them, he spent the last five weeks of his life teaching those he hadn’t previously covered.

And the bottom line?  We have five books and that’s what we have to learn!

A gittin Shabbis- have an easy fast!

Nine Days 2017: The Virtual Siyum & The Ever Shrinking Observance of the Nine Days