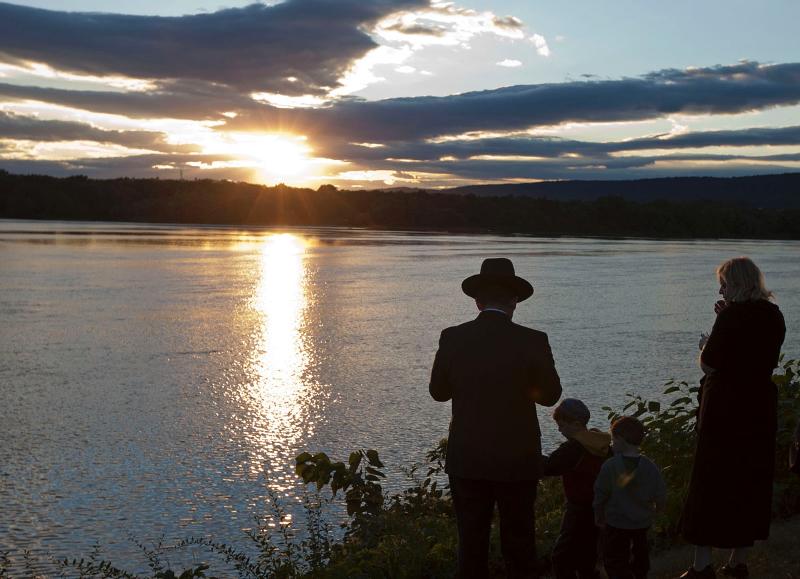 Vayelech 2018: All About Tashlich 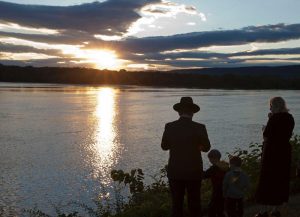 This past Monday, the first day of Rosh Hashono (yes, it is observed two full days), following Mincha (afternoon prayers), and though the weather was not cooperating, it was decided to walk over to Tashlich where the Oisvorfer recited the Tashlich prayer.  In years past, ober not this year, and not for the past few, the Oisvorfer and thousands others all over the world, would, in addition to the recitation of the designated prayers, also throw some challah, bread, crumbs, and even cake, into the body of water they were near as part of the Tashlich ceremony. The thinking was/is that just as one throws the bread and other items away, so to -symbolically at least- are their sins being cast away. Ober, is that emes? Is it that easy? Can we sin all year -at times with yeasty products, if you chap- and then saunter over to the nearest body of water and discard our sins with three short prayers and some bread? Is it that easy to fool the RBSO? Me thinketh not!

What the hec is Tashlich? Where is it? How did it get its name? Does one go to Tashlich? Or, does one go elsewhere and then recite the Tashlich payer? And for those who do, why? Shoin: so many questions and there are more. As the Oisvorfer was standing in the rain reciting the universally accepted Tashlich prayer, and as rain drops were splattering all over his Tashlich handbook (Art Scroll), he began thinking more about this custom. Who invented it? When? Why? Is Tashlich a mitzvah? A Commandment? Or, but a custom? Shoin, let’s find out. Can we really throw away our sins by the recitation of a few paragraphs? Does it help if we throw in some bread? Bread crumbs? Entire slices or even loaves? Who started this practice? Why is it controversial? Is it still practiced? Shoin, I’m getting a headache. 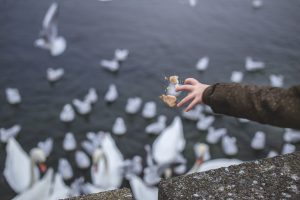 Harking back some 50+ years…OMG!, the Oisvorfer has very clear and fond memories of walking from Boro Park over to Prospect Park where many hundreds, efsher even thousands of Yiddin gathered -supposedly- to recite Tashlich. Ober the emes was that the recitation of the Tashlich prayer was the last thing on our minds. We were there to see and be seen. Who the hec wanted to see a 10 year old? Mistama no one, ober that’s not what we thought back then. We wandered back and forth along the water’s edge looking desperately for people we knew, efsher also to peek at some young maidens. Hey, our forefathers did well near bodies of water, why not us? And let’s recall that Moishe Rabaynu whose last day of life is recounted in this week’s rather short -30 pisukim- parsha of Vayelech, also made his way -many decades earlier- to the water where he met a number of Yisroy’s daughters. He settled on one of them, a young maiden by the name of Tzipoirah. We don’t hear much about her in the heylige Toirah. Out forefather Yaakov fared better: he met his beloved Rochel at the well, ober wound up with her and her three sisters, two of them but half.

As the hours went by, we were met by a few hundred Lubabitcher Chasidim who made their way to Tashlich from Crown Heights. One year, the Oisvorfer caught a glimpse of the Lubabitcher Rebbe himself. It was the highlight of his Rosh Hashono. And ever since, the Oisvorfer, his eishes chayil, his children, and kimat everyone he knows in the orthodox world, make their way to Tashlich, mostly on Rosh Hashono. Not much has changed: people still go to see and be seen. Shoin! The Oisvorfer admits that there have been years when he did not make it to Tashlich on Yom Tov and recalls vividly one year when he parked his car near Bay Parkway in Brooklyn and made his way to the pathway along the water to recite last minute Tashlich. He was not alone. Seemingly, our rabbis extended the time allotted to recite the Tashlich, to discard our aveyris (sins), until Hoishana Rabba. Even at that late date and hour, he was not alone. There, along the water, he found many Chasidim and their families. It was an outing.

And during the Musif, as the Ba’al Tifila was reciting a number of ‘yoitzris’ -additional prayers in the form of supplications- that very few recite- the Oisvorfer’s mind -as it did in yeshiva for so many years- began to wander. He was thinking about the origins of this strange custom. Is it discussed in the heylige Toirah? It is not! How about in the heylige Gemora which as you know discusses everything else under the sun and then some? Also not! How about by the rishoinim, our earlier rabbis of great esteem? Also not!

How then did Tashlich come about? Who invented Tashlich and its prayers? Says Rabbi Art Scroll whose booklet the Oisvorfer was reading that day: Tashlich is observed by both Ashkenazi and Sephardic Jews. OMG! And says Rabaynu Chaim Vital: it is a minhag among ashkenazic Jews to go on the first day of Rosh Hashono (though the second day is ok in case of inclement weather), just after mincha but before shkia (sunset) to a big ocean, or any smaller river, or body of running water, preferably contain live fish, to recite the Tashlich prayer. And, he continues: “it is a nice custom; very nice if one goes outside the city and stands at the edge of the water and reads the three verses found near the end of the book of Micha.” Who is Micha? Micha was one of the later Prophets who is perhaps most well known for the last three verses he wrote which are read as the last three verses of the Haftora’s on shabbis shuva (shabbis of repentance), this very shabbis, as well, at the haftora read at mincha on Yom Kippur. What do these verses say? “Who G-d is like You, Who pardons iniquity and overlooks transgression for the remnant of His heritage” (Micha 7:18-20). 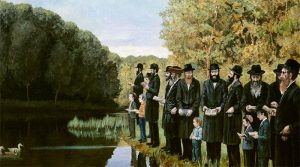 Once engaged in this topic and while the ba’al tifila was still reciting words no one was following, the Oisvorfer pulled out a few more seforim (holy books). One of them, the Ta’ami Haminhogim (reasons behind our customs) said this: the reason we go to a river that has fish in order to recite the Tashlich prayer on Rosh Hashono is this: the medrish tells us that when our zeyda Avrohom took his only and beloved son Yitzchok -while being tested by the RBSO- to the Akeydo (the binding), he needed to cross a body of water. And? Along came the Soton (Satan -bad guy that he is) intending to thwart Avrohom’s plans. Avrohom was determined and made his way into the river where soon enough its waters were at his neck. Avrohom yelled out “help me Hashem, for the waters have arrived at my neck.” Seeing Avrohom’s devotion, the RBSO saved Avrohom (who seemingly could not swim): they continued on their journey to the Akeydo. And? What have fish and a river to do with Tashlich? We’re getting to that; hold on! Says the good book: the river we say Tashlich at should have fish. Moreover, some people have the custom to throw bread into the waters. Why? Because we need to remember and recall that the Yiddin are like fish. We are? Ober, aren’t we more like animals, if you chap? Fish? Indeed, we are like fish who get suddenly caught in the netting which is laid out to trap them. By thawing bread to them, we are showing them compassion. So too is mankind always flirting with danger (bad behavior) and in need of the RBSO’s compassion to save us. And? By feeding the fish who are in danger, by showing them compassion, we are hopeful that the RBSO will show us compassion as well. By internalizing that the fish are in danger of suddenly being caught up in the netting, we will be spiritually moved to repentance and to get back on track with better behavior. Gishmak! Ober, says the Maharil: the custom of throwing bread into the water is a bad custom! Shoin.

Ober listen to this other custom associated with Tashlich and practiced by many Chasidim. Grada the Oisvorfer, in disbelief, asked a few Chasidim and they confirmed that the following is emes. There is seemingly also a custom to shake out the corners of one’s clothing while at Tashlich. Why does one shake out the corners of his clothing? Seemingly this custom allows one to shake off any klipos (lit: spiritual shells or peels) which have become attached to us during the year as a result of some form of misconduct, typically sexual, if you chap. What? Shoin, this topic is way too deep and kabalistic and not for us or for today, ober, klipos seemingly attach to us whenever we sin -either sexually or otherwise- and especially so when the sins are of a sexual nature. Mistama you know whereof the Oisvorfer speaks. Therefore the custom is to shake these bad boys off our bodies. How this works, ver veyst? He goes on to say that it’s specifically the custom to shake out the corners of our Tzitzis (fringes). Why? Ver veyst? Ober says the Oisvorfer: one must be careful not to shake too much, if you chap, lest one create new klipos and more of these bad boy klipis get attached. The cycle begins again.

The bottom line: the earliest printed reference to Tashlich comes from the Maharil who mentions Tashlich without citing a source. In other words: Tashlich is a made up minhag (custom) that seemingly took off, and remained popular. Says the RambaM  “minhag yisroel Toirah hu,” (a custom of the Yiddin has the status of Toirah). Ober doesn’t the heylige Toirah specifically warn us not to add or subtract any mitzvis? Indeed it does. Ober, it appears that customs may be exempt; they seemingly snuck in the back door, and Tashlich, with or without bread being cast to symbolically throw away one’s sins, remains popular. Psychologically, it makes people feel better about themselves as they get ready for the Aseres Yimay Tshuva (10 days of repentance) which began with Rosh Hashono. Good luck cleaning your slates.