Shelach 2020: Does Forgiveness Come With, or Without Punishment? 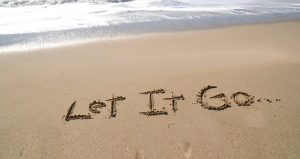 Does Forgiveness Come With, or Without Punishment?

Let’s begin with the plague of 2449.  The plague of when? Is the title referring to a plague to occur 429 years from now? Or, does it refer to plague that occurred on our lunar calendars back in the year 2449, some 3,331 years ago? And the answer is azoy: the events of Parshas Shelach which we will be reading this coming shabbis took place in the year 2449 and back then, in the second year after the Yiddin left Mitzrayim (they left in 2448), the RBSO, very upset with the unmitigated gall of the Yiddin and their intransigent ways, punished a few with a plague; read all about it in the paragraphs to follow. 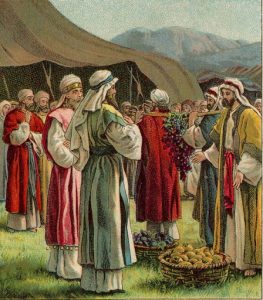 What a difference a week makes. In last week’s parsha, Moishe – following complaints from the Yiddin regarding their menu of Munn- was so fed up with his job, he asked the RBSO to kill him. Ober one parsha later, and welcome to Parshas Shelach where Moishe -seemingly fully rejuvenated, efsher he got  promotion or a raise, ver veyst- and guess what? Once again he will be pressed into action, he will need to use his magic to convince the RBSO to stand down and not kill all the Yiddin. He’s back at doing what he does best, crisis management. What led to this exchange of words? Didn’t the Yiddin learn their lesson last week when complaining about the lack of meat? Seemingly not. This week, as you all know is the parsha of the miraglim, the spies sent out by Moishe to reconnoiter the Promised Land. Nu, when 12 Yiddin hang out for even an hour, what is discussed? The financial markets? Other gisheftin (business)? The parsha of the week? Ah nechtiger tug! They gossip! Nu imagine 12 guys traveling and staying together for forty days; what do you thing they were discussing? A shtikel Gemora in Buba Mitzia and arguing what to do if any of them, or specifically two, finds a schmata on the ground, and to whom it belongs? Not!  They were gossiping; it’s what humans do. Shoin! And gossip they did about the Promised Land which they seemingly denigrated upon their return. The bottom line: they frightened the already fickle, hapless Yiddin who were ready to return to Mitzrayim last week for some meat, fish, and other side dishes. Grada the entire list of delineated items they were longing included leeks, onions, garlic, cucumbers and watermelon, and reader Bruce Mael, whom the Oisvorfer met last shabbis on the way to shul taka asked if the Oisvorfer omitted mentioning watermelon in light of recent events in various cities, if you chap.  Avada all who read this review for the past ten plus years, know how careful the heylige Ois is not to disparage any one person or group; he is avada an equal opportunity offender and politically correct except when he’s not!

Nu, and avada you all know how much the RBSO hates gossip which kimat always includes loshoin horo, and He specifically –seemingly even more so- hated gossip about the Promised Land, the very land He promised to Avrohom Ovenu. And shoin, this week, the RBSO is mamish fed up with the Yiddin again –and as He proposed following the eygel caper- is ready to fire the entire squadron of them. He’s ready to defund and dismantle the Yiddin: fartig. Said the RBSO to Moishe azoy:

We’re talking annihilation and death to all! Again, like He did in Noiach’s time, He’s ready and certainly able and it appears also willing to start all over again. Ober, a suddenly reenergized Moishe comes to the rescue of the Yiddin with the following exchange. Let us read the words innaveynig. Says the heylige Toirah (Bamidbar 14: 13-14), azoy:

The bottom line: the RBSO agrees to stand down and more. He tells Moishe the Yiddin are to be forgiven in accordance with Moishe’s words. Ober did the RBSO mamish forgive and forget? If the RBSO said that He was forgiving the people, why does He then say in pisukim 26-29 mamish the opposite? Let’s read those words together. 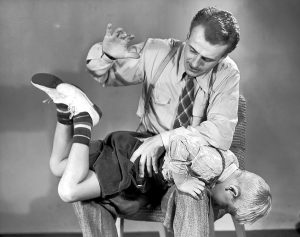 What’s pshat forgiveness if the RBSO just handed them all death sentences? Said the RBSO “If they will see the land that I have sworn to give to their forefathers, and all who anger Me shall not see it. Say to them, as I live, by the word of Hashem, if I shall not do to you as you have spoken in My ears. In this wilderness shall your carcasses drop.” Is punishing the people not in contradiction to the RBSO stating that He forgives them?

Did He or did He not forgive them? Seemingly not! Was the forgiveness extremely qualified and limited? Nu, if we continue reading it’s quite obvious that He did not mean complete forgiveness; farket! Mamish a few pisukim later, swift and severe punishment is meted out. It includes death for the perpetrators of the loshoin horo, more death to those who suddenly decided to conquer the land, and a 40 year death sentence in the midbar to all men above the age of 20. In other words: the entire nation of adult males, though only ten people sinned, received quite the punishment; is that what we call forgiveness? Makes one wonder what actions might have been taken had the RBSO not acquiesced to Moishe’s entreatment. Yikes!!

And the shaylo iz azoy: what’s pshat when the RBSO says He forgives but doesn’t really? What did the RBSO say and do immediately after He told Moishe the Yiddin were forgiven. Did all go smoothly? Not! Ershtens He brought about a plague, efsher the first to be visited on the Yiddin in their young history as a nation. Avada we call recall that the RBSO has used plagues to get a message across; recall how the Mitzrim received at least ten. If you read the Hagodo of Pesach, you will find the certain rabbis argue that the Mitzrim saw hundreds of plagues. 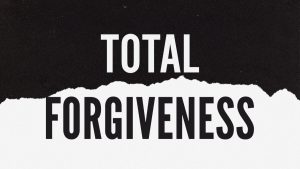 Is the underlying assumption that forgiveness comes with the avoidance of consequences for the sin committed? Is that not what we expect when forgiven? Does forgiveness automatically include a waiving of the punishment connected to the sin? Or, is that too much to expect? Does forgiveness –at times at least- come only after punishment has been meted out?  How does the RBSO work? Does tshuva (repentance) give one a free pass from punishment? Does Yom Kippur which is meant to forgive mean that we will not be punished? Does saying I’m sorry and showing sincere remorse mamish give one a pass? Limoshol (by way of example only), does saying I’m sorry to your eishes chayil close the chapter of whatever is bothering her that day?

There are seemingly certain sins and transgressions where the RBSO may be appeased by remorse; they are demonstrated through sackcloth and ashes. Ober, the more egregious the trespass against the RBSO’s law, meaning the sins most of  you commit, nebech, the more He requires for repentance to be complete. To attain forgiveness for great sins, a person must be willing to confess the sin and embrace the punishments required by mortal justice. Says Rashi azoy: when the RBSO said “I have forgiven, “He did not mean a complete forgiveness. Instead He meant azoy: My forgiveness is qualified and limited, in this case limited to the words Moishe used when attempting to save the Yiddin. What’s pshat? In plain English: Moishe argued that were the RBSO to kill all the Yiddin, the goyim would have a field day arguing that He had no power to deliver them to the Promised Land. In this case, the RBSO only forgave them in accordance with that part of Moishe’s plea which referred to a great “chillul Hashem,” meaning that God’s name would be desecrated were the goyim to think and say that He could not deliver them to the land and therefore killed them all in the midbar. The RBSO’s forgiveness related to the fact despite their many transgressions, the nation of Israel would continue, only without this particular cast of members. Only the next generation would get to enter the land and by doing so, a chillul Hashem would be averted. The bottom line: the generation of Yiddin in the midbar were not forgiven. On the other hand, the RBSO did not instantly kill them. Instead He let them die out naturally in the midbar. What they got was partial forgiveness. In this case, though the Yiddin were -upon death- spiritually redeemed, they needed to suffer the consequences of their rebellion and suffer the mortal punishment which prohibits them from inheriting the land of promise in their lifetime. The RBSO did not kill them! They valgered in the midbar until they died of natural causes.

As to why Moishe –as he did post eygel- did not ask for complete forgiveness, ver veyst? Perhaps he knew that the RBSO treats those who disparage the land more harshly than those who worship a golden calf. Loshoin horo He seemingly abhors, especially so about the land. Grada, the Ramban asks azoy: In Sefer Devorim as Moishe recounts the history of the past 40 years, he states that following the sin of the eygel, he davened to the RBSO. “And I fell before G-d and prayed (9:18) and he also mentioned Aharoin’s prayer (9:20.)  The prayers and only  a few thousand sinners lost their lives. In the context of the Meraglim, he never mentions his having prayed. He simply argued and discussed with the RBSO and rationally explained why He needed to stand down.  Moishe did not pray that they be forgiven but merely that G-d should tolerate their sin. His prayer was not ideal and perfect.” Says the Ramban (Bamidbar 14:19):  One wonders why did Moishe not ask for more? What was stopping him from asking for absolute forgiveness? And one wonders; had he requested total forgiveness, would the RBSO have complied with his wish? Ver veyst? We will never know. Ober one thing we do know for sure and it’s the final bottom line for the week: At times the RBSO offers partial or even full forgiveness. Ober, those who are married, or were, know this for with certainly:  there is no such thing as total forgiveness from a woman no matter how one shows remorse (to include apologies and jewelry). They will offer partial forgiveness and act as though all is normal, ober it never is. Women never forget and will, from time to time and especially during an argument, recall every sin that her husband has committed since the day they met.

Bihaloischo 2020: A Good Piece of Meat

Koirach 2020 - Death to the Protestors & Moishe Accused of Murder!

Shemois 2023: Dead Yet Alive & Taking Advice From Those Less Fortunate

Chaya Soro 2022: Lies of the Matchmaker