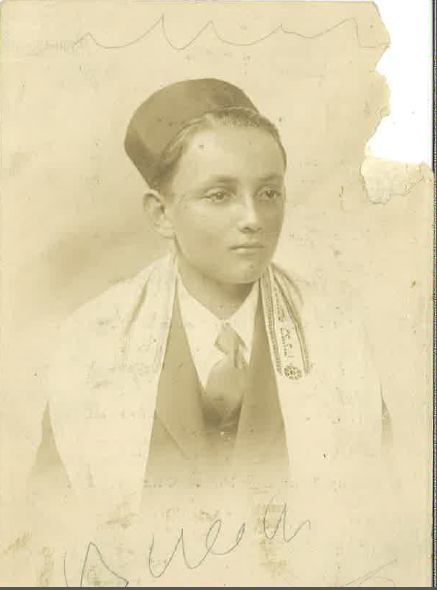 Warmest mazel tov wishes to Zena and Norman Dachs, nearly mishpocho, dedicated Oisvorf readers and followers whose granddaughter Jayme, daughter of Karen and Michael, will be wed later this evening to David Chapler. May the bride and groom enjoy at least 70 years of blissful marriage. Why 70?  Read below.
Raboyseyee and Raboyseyettes:

84 years ago this coming shabbis a young Norman Bigel celebrated his bar mitzvah on Parshas Bolok, the very parsha we will be reading this coming shabbis. The year was 1930. Norman will IY’H (with God’s help) turn 97 in three days, on July 6th.  That’s many decades ago. And as we Yiddin say, biz-hindred-in-tzvontzig (may he live in good health till 120).

The Oisvorfer had the great pleasure of having Norman and Alan, one of his three children, at the shabbis tish two weeks ago where he charmed and mesmerized the family with his elegance and storytelling; his memory of events dating back 60, 70 and 80 years is crystal clear and mamish gishmak. As an aside, Alan, though quite youthful himself, is just north of 65. Norman is a fine gentlemen who loves shul, shabbis and everything Jewish. He was more than happily married for 70 years to his sweetheart Ethel whom he met at a dance in Boro Park; my how the times have changed. They knew each other for 75 years. Their courtship, mostly through the mail while Norman, an officer, was in the service flying around the world, lasted five years. He was smitten from the very first dance. “I met her at a dance and we never stopped dancing” recounted Norman just last night when the Oisvorfer stopped off to say hello and to find his bar mitzvah picture seen just below. He sorely misses Ethel who passed away towards the end of March, just a few short months ago at the age of 93.

As an aside, he truly enjoyed the eishes chayil’s cooking. For his upcoming birthday, she promised to deliver a fresh potato kugil; he is blessed with an excellent appetite as well. The Oisvorfer only met Norman and his son Alan a few months back? How? Over a talis and this is how it all unfolded.

A few shabossim before Pesach, the Oisvorfer, at the urging of the eishes chayil, found himself davening at Congregation Beth Sholom here in Lawrence, New York. Grada the Oisvorfer davens there daily, really enjoys the Rabbi, the lectures and why he doesn’t daven there more regularly, ver veyst. In any event, we divert from Parshas Bolok in which the Yiddin are, as was Moishe just last week, involved in yet another form of shtekin abuse. Of course you recall that in last week’s episode of the ‘not quite Promised Land worthy Yiddin’, Moishe hit the rock and got punished; this week, the Yiddin are shtekin abusing the Moabite shiksas while getting rid of rocks, if you chap. In one of the wildest stories the heylige Toirah will ever tell us, of course with much additional color and efsher some embellishment by the myriad medroshim who were all over this myseh, a number of Yiddin will have sinned by combining shtekin abuse and avoido zoro, always a lethal and deadly combination. How many? We don’t know but 24,000 were dead by the time the parsha is over. That last tidbit found at the very end of the parsha. And how many times has the Oisvorfer told you that the RBSO typically gets rid of real troublemakers almost immediately; this last batch lasted but 9 pisukim, not even 1 full aliya! Time permitting, avada we would love to cover that topic one more time. Of course, you can find extensive coverage of Bolok at www.oisvorfer.com.