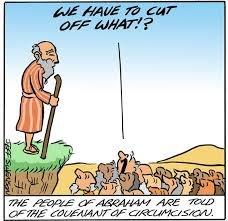 HOISHANA RABBA 2014 – SPANX FOR EVERYONE

Nothing very interesting in this week’s mail bag but…..last week in shul, after davening of course, a choshovo reader approached and said that she read the Oisvorfer’s pshat about being in the box and it got her thinking.  Efsher (just maybe) you recall that we were discussing whether an American, while in Israel over Sukkis needed to observe 1 or 2 days of Yom Tov. And pshat was that whether one holds 1 or 2 days, he or she, is in the box. Does everyone agree? Of course not!  What do they all agree on?  That  if one  holds either 3 or zero days, one is out of the box. Veyter! And why is this topic nogayah (relevant) again one week later? Because as we approach the Yom Tov of Shmini Atzeres, mir darfin tzu gidenkin (it’s important to remember) that we have a minhag avoisaynu beyodanu (a custom passed down thru the generations) to discuss, argue, and even fight about one particular topic: is Shmini Atzeres the 8th day of Succois or is it a standalone holiday? And taka this coming Wednesday evening, Jews all over the world will once again –as they do yearly- be debating this and very related topics. And the debate which might be resolved with Moshiach’s arrival- though not certain- will go like this. Will Wednesday evening and Thursday be considered the 8th day of Sukkis, or, will it in fact be a new Yom Tov, one that has its own identity, one named in the heylige Toirah? Either way, it’s Yom Tov; either way we’re back in Shul.  And either way, just in case you’re still hungry or haven’t gained enough weight in the first three days, we get to have six more helpings of challah and kugil: Gevald (OMG)!!

And of course you all know that this debate has ramifications as to whether or not we eat some, none, or our entire meal in the sukkah Wednesday eve and part of Thursday. What to do? Remember the box! Whatever your minhag is, make sure you are in the box and if you are, you are taka most likely on safe ground. Avada we all chap that eating from a forbidden box, if you chap, in or out of the Sukka, is zicher forbidden on any day. Veyter! Ober before we get to Wednesday evening, we need to first celebrate an even greater day, this one the special, maybe even holy day, of Hoishana Rabba.  Is this taka a real day and is it mentioned in the heylige Toirah? Soon we’ll address that, ober ershtens (firstly)…

Nu, we made it through the first six days of Sukkis and judging by the tightness of our hoizen (pants), the Yom Tov was quite filling. Maybe too much so. Because most of you have mamish no control when it comes to eating at a shul kiddish, followed shortly thereafter by another full meal at home, any resolutions you made about watching what you eat over Yom Tov are like other resolutions you made over Rosh Hashono about improved behavior: mistama by now also broken. Are we meant to look as round and bulbous as our esroigim by the time Yom Tov is over? Ver veyst?

The bottom line: orthodox Yiddin cannot maintain a diet because in the end, the allure and temptation of the shmorg at a kiddish is mamish too powerful. Perhaps stronger than the yetzer horo himself for other temptations, if you chap.  While the Oisvorfer has seen many people walk away from business deals, and on rare occasions, even form the yetzer horo, he has yet to meet anyone that withstood  the allure of the kiddish or shmorg! Shoin, gyms and personal trainers also need to make a parnoso (living).

By the time Yom Tov is over this coming Motzei shabbis, most of us will need spanx just to close our pants properly; the good news is that most of our wives, even the skinny ones, have a few pairs, oy vey! Why would a skinny woman own spanxs, efsher you’re wondering? Shoin and poshit geredt (plain and simple): everyone chaps why larger women would want spanx ober the chiddish (breakthrough news) is that even skinny women have spanx. And taka why? Nu, it so happens that a good majority of skinny women don’t really believe they are skinny or skinny enough and therefore they too, collect and wear spanx from time to time. In the end, spanx are seemingly for everyone and especially so after  a three day eating festival: ingenuous marketing, mamish.

In any event, tomorrow, raboyseyee, is the special Yom Tov (holiday) of Hoishana Rabbah. What’s so special about a holiday that is not mentioned anywhere in the heylige Toirah by name or even by reference?  Nu, believe it or not, our sages or maybe it dates back to our Nivi’im (Prophets) –we shall soon see- invented this day. Were they in the business of selling Arovos and had too much inventory left over on erev Sukkis, ver veyst? And taka selling bundles of 5 on clearance made some good economic sense. Is that what happened, ver veyst? One thing is zicher. There is no mention, none at all and that would include the heylige Toirah, the Mishna, the heylige Gemora and others sources that discuss this particular Holiday. Nu, how then did it come about?

Moreover, while the great majority of mitzvois ah-say (positive commandments), be they Toirah or Rabbi mandated, do come with some form of explanation; no reason whatsoever is given for the minhag we have of beating the bundle of 5 hoishanis into the ground and zicher no explanation is found as to why we have the audacity to throw the beaten hoishanis on top of the Oron Koidesh that houses the heylige Toirahs. Who made this up?

Seemingly, this practice was invented by the prophets, some say, well over 2,000 years ago.  Hoisha Na (lit: Please save) is, as we will learn below, mamish the day that Divine judgment for the year takes effect. And what reason did the Prophets give us for klapping (banging) Hoishanis on this day? They didn’t give us any! Shoin! Seemingly they either wanted to keep the reason hidden or efsher they thought that we would know intuitively why we find ourselves in a hoishanis beat-dwon, ver veyst.

Shoin, after exhaustive research the Oisvorfer found some explanation in the writing of Eliyahu Zuta who said azoy: the beating of  the hoshanis causes the leaves to fall away and this act symbolizes “the falling away of the sparks of Divine Judgment. And on Hoishana Rabba, as we will address mamish below, we are attempting to cast away any negative judgment. How does all this work? And who said that hoshanis –willow branches– symbolize Divine Judgment? And how do we have the chutzpah to throw Divine judgment away? Nu, lommer lernin (let’s learn).

Seemingly, even back then, our sages realized how poorly behaved the Yiddin of their generations were and decided to take action. They chapped that although Yom Kippur was the date that the RBSO sealed the fate of all mankind, they decided that the Yiddin needed an extension. Shoin and just like that, they created Hoishana Rabba and told us that on this day and up until this day, despite Yom Kippur having passed more than 10 days earlier, we Yiddin can still somehow unseal the RBSO’s decree and have it re-written. We can? We can mamish unseal the RBSO’s decrees? How is that possible?

Nu, to chap this concept, we need to borrow a metaphor from our dentist friends and imagine that you are getting a crown installed or a replacement tooth, ver veyst. Initially the dentist will mistama install a crown with a sealant material ober will refer to the tooth and the sealant as temporary. Weeks later, he will install the permanent with everlasting sealant. Shoin, now you can chap. Seemingly the sages were able to convince the RBSO to only use temporary sealant materials  on His Yom Kippur decrees and hold off on the final sealant until Hoishana Rabba. And therefore raboyseyeye, you have mamish until tomorrow to make final amends with the RBSO. You can still perform the Tashlich ceremony and try ridding yourself of your sins that way and of course you can bang away at the Hoishanis hoping that might work. Is any of this true, ver veyst? Or, are we efsher klapping Hoishanis tomorrow in vain or more likely for the plethora of avayrois you committed since Yom Kippur? The latter of course, the  more likely scenario.

In any event, since its inception, Hoishana Rabba, technically the 7th day of Sukkis, has elements  of a regular intermediate Sukkis day + sprinkles of Yom Kippur and the davening too is  a combination of weekday, shabbis, Yom Tov. And to top it all off, it includes the hoishanis beating and when it’s all over, if you said at least half the words – no small challenge-  you might have a shot, albeit  a very long one, of having the RBSO soften up and change any negative decree coming your way, into something more  manageable. And after klapping (beating and banging) your chests kimat  (nearly) 500 times on Yoim Kippur, on this day, you get to bang one more time, if you chap. Can banging an innocent Hoishana (willow) save your life?

Ober listen to this. Says the heylige  Zoihar (Tzav 31b) azoy:  Hoishana Rabbah is  a judgment day akin to Yom Kippur. For on Hoishana Rabbah the parchments containing the Yom Kippur decrees are made final. The Mystics state that whereas our fate was sealed on Yom Kippur, the writ containing the decision of the Court on High is only rubber-stamped – think permanent sealer-on the seventh day of Sukkis which is Hoishana Rabbah. Hence, until this day, a last-minute appeal to the Heavenly Supreme Court may carry some weight by virtue of extenuating circumstances. Those circumstances being that you put off repentance until the last minute, minuvil that you are.

And more good news: the good and decent people were previously judged on Rosh Hashanah. In fact, so were all others ober it appears, according to our wise rabbis, that those people not totally shlecht (evil), were extended until Yom Kippur to repent. If they failed to do so, the verdict against them was written and sealed, but not yet ‘delivered’. That will be done tomorrow and instead of chapping as you usually do, chap areyn some last minute tshuva; efsher you can still be saved, ver veyst.

And taka says the Medrish (sorry cannot find original source) that  the RBSO said to Avrohom Ovenu azoy: “I will give your descendants a special day for forgiveness:  If they are not forgiven on Rosh Hashona, then let them try repenting on Yom Kippur. If not, they will have until Hoishana Rabbah.”