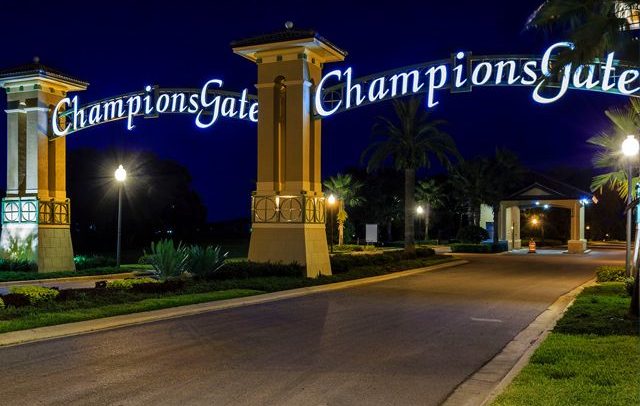 So many thoughts dancing in my head, where to begin? Let’s start here.

While many are enjoying some time off for the Pesach Holiday, away from work, their computers, and or, whatever else is used to earn money during the year, today, mamish on Chol Hamoed Pesach, here in Champions Gate near Orlando, Florida, the heylige Ois worked and took in a total of $150. More money is coming tomorrow. Sadly, no money –as in profit- was earned, but a full $150 did come in through Venmo and cash mamish as the Ois completed two different transactions.

And di shaylo is azoy (the question is this): is it at all permissible to work on Chol Hamoed Pesach? May one engage -as did the Ois- in commerce? May one go to work, sell goods, and or services? May one trade the market? And the list goes on. And what exactly is Chol Hamoed? Nu, to answer these questions, the heylige Ois consulted with various websites for the latest rulings on what may or may not be done in terms of work. Let us learn the basics. And what is Chol Hamoed? In short and quite literally, Chol HaMoed is a Hebrew phrase meaning “weekdays [of] the festival.” The literal translation: “the secular [non-holy] (part of) the occasion.” Chol HaMoed refers to the intermediate days of Pesach and Sukkos.

A few thousand years ago, the heylige Toirah –as you well know, or should- defined what may and may not be done on the shabbis and Yom Tov. Of course, our sages of yore further defined the rules and later, greatly expanded the ‘do not dos.’ The bottom line is azoy:  Creative work (meloacha) is prohibited on the heylige Shabbis and Yom Tov, and so too, it’s prohibited on Chol HaMoed. Says who? The Shulchan Aruch O.C. (530:1), that’s who. Of course not all agree, and as expected, a debate ensued between early halachic authorities (Rishonim). Some are of the view that the prohibition of melacha on Chol Ha’oed is ordained by the heylige Toirah while others are of the view that work restrictions were ordained by the Talmudic sages. What’s the difference you ask? It all comes down to the punishment meted out for those who violate. Which is it? Ver veyst?

What do the sages agree on? That they were divinely authorized to decide which forms of work are permitted and which are prohibited on Chol HaMoed. Says who? The heylige Gemora (Chagiga 18a). For reasons they deemed logical and correct, they did distinguish between real Yom tov and the “chol days” and instituted a number of exceptions. Practically, this means that we are permitted to do certain types of work on Chol HaMoed that we are not permitted to do on Shabbis and Yom Tov. So far so good. 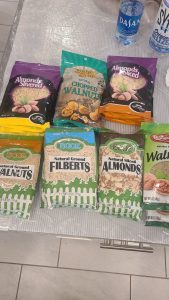 One of the five categories of work allowed on Chol HaMoed is called davar ha’aveid, roughly defined as work which we are permitted to do in order to avoid a financial loss. In addition, says the Ritva (Moid Koton 13a), azoy: we are permitted to do this type of work if worry about financial loss will spoil our enjoyment of the Yom Tov. Avada one should not have to worry about money on shabbis or Yom tov. The bottom line: Meleches Davar Ha’aved (loss of opportunity) is mutar (allowed). However, it is unclear if the loss of a possible gain is Mutar or not. In plain English: Chol Hamoed is considered like Yom Tov mamish, when work is verboten. Ober, one may go to work if otherwise one would lose one’s job. If, however, one will lose vacation days etc. one should then not work. Confusing? Of course. On the other hand, if what is at stake is not loss of the job, but making less money that month, one should not go to work. If, however, the loss of salary will cause severe consequences one can go to work on Chol HaMoed. Two Advil please.

Moreover, if one is in the middle of a lawsuit – and which Jew isn’t suing at least one other Jew, or planning to because one cheated, robbed, swindled the other (typically his best friend)- one can continue with the lawsuit over Chol Hamoed. If there isn’t any loss in putting off dealing with it until after the Chag, one should wait until after Yom-Tov. Ober, if one wishes to file a lawsuit on Chol Hamoed, one should preferably wait until after the Chag.  If, however, one would lose out by waiting, one can go ahead and file even during Chol Hamoed. Money rules! Of course our sages chapped that without money, who would support them? 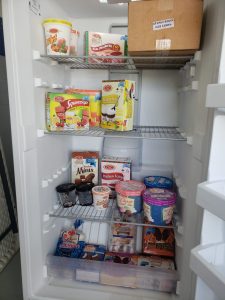 And before we get to the main point on the Ois working and taking in revenues on Chol Hamoed, mistama many of you need a primer as you have long forgotten the following additional rules.

Meleches Umon – professional work is forbidden on Chol-Hamoed. Therefore any job that a layman cannot perform without having special training is forbidden. Limoshol (by way of example, one cannot have clothing tailored on Chal Hamoed, ober if one ate like a chazir over the first days at one of the hotel programs, or even in his own house, and a button popped off his shirt, one is allowed to sew the button back on.

And with that intro, let’s discuss the transactions the Ois entered into. For the first time ever, and as mentioned above, the Ois finds himself (and family) over in Champions Gate, which is a 2400+ private home development. Seemingly a great majority of them –kimat all- are in the rental pool and the Yiddin have discovered them perhaps because they offer garbage pickup seven days a week and the Yiddin produce garbage –lots of it- seven days a week, ver veyst. A number of years ago, not too many, Yiddin discovered Orlando and the fact that houses with 4-12 bedrooms and 11 bathrooms can be rented for Pesach on the cheap. I hear that one nearby development is already also sold out for Sukkis. According to uninformed sources, some 100,000 Yiddin have descended upon Orlando and surrounding cities and communities for Pesach. There are several developments –all within 10-15 minutes of each other and each has many hundreds and thousands of Yiddin. There are tens of thousands of Yiddin of every variety – shorts, jeans, suits, bekeshes black pants, white shirt, all davening together in the same makeshift shuls, garages, front and back yards and elsewhere; miraculously, they all get along.

To adequately describe the scene would take a few more pages (at least) ober the bottom line is this: many thousands of people are on several What’sApp groups where messages are exchanged every few seconds. And if ever there was a reason for the invention of the Internet, the ability for 10,000 plus families to be in constant contact regarding shul, food, medical, things to do and places to visit, concert tickets and anything else one can imagine, it’s for this very purpose.

And because Orlando is not now, and was never fully equipped to accommodate this many Jews- Walt Disney rolling over and over in his grave- families either have their meals catered by one of several caterers, ship their purchased food from New York and elsewhere, send or drive the ingredients to their respective homes and cook all here. Within catering, there are several options and those for another review next week. And because Yiddin are – since their days of traversing the Midbar for 40 years- always worried about their next meal, and need to be fed 24/7 (to include intravenously while asleep), they over-order, overbuy, overspend, and overeat. The food is over the top! Avada, it’s not nice and efsher also sinful to throw out food and as a result, all day for these past few days, people are in the chats buying, selling, trading and conducting business on Chal Hamoed mamish. 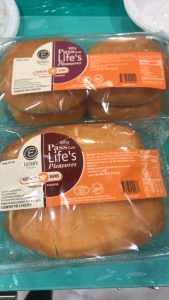 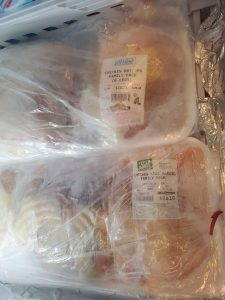 And that Raboyseyee, is exactly how it came to be that the heylige Ois, overloaded with raw frozen chicken, beef burgers, hotdogs, steaks (for nightly BBQ’s), frozen 9×13 pans of delicious food from our friend Chaim Richter of Richter Caterers (www.RichterCaterers.com) decided to take to the chats and begin the effort of unloading some of the extra food ordered while menu planning. And if that weren’t enough, immediately after landing we ran to Costco, Win Dixie, and other places filling in with other items not needed and not touched.

For sale … unopened round handmade shmura matzah boxes.. have lots 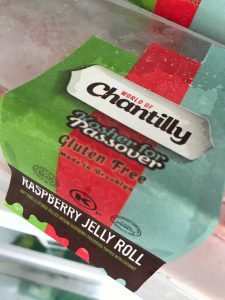 The good news: other families too were panicked and so it was that the Ois was able to unload a few pans of food, extra shmura matzo, raw food items and even almond milk. The chats represent a true supply and demand marketplace where prices –at cost- in the early days of Pesach, have been dropping like lead balloons as we approach the final days. Last night food was going free and by later today, families might pay to have someone come over and relieve them of their extra food. And even more good news: Chaim Richter –at 5AM this morning- sent me a message that a few of his clients are still hungry; they –for reasons hard to fathom- want yet more food- and asked if I had a few extra pans to sell back. Shoin, by 9:00AM just after shul, there was Chaim –always looking to satisfy his burgeoning customer base at the house, and again today, the Ois will take in some revenue and cut down by a few hundred dollars the losses sustained while over ordering and overspending like drunken sailors.

Does anyone have a hot water urn they can loan or rent?

Does anyone have extra kosher for pesach whip?

Ober was all this commerce kosher and sanctioned on Chol Hamoed? And the answer is azoy as found in the good works of our sages and now available to all with a bit of research. The bottom line:  One who sells things that are for the purpose of Yom-Tov may do so on Chol-Hamoed. Although many Chol-Hamoed activities involve various melachos that would otherwise be verboten, these activities are nevertheless allowed since they are for the purpose of Simchas Yom-Tov and enjoying the Chag.

A gittin Shabbis and Chag Somayach to all!

Bamidbar 2021: Superstition vs a Segula

Emor 2021: The Baker & The Beauty and The Koihen Godol & The Virgin