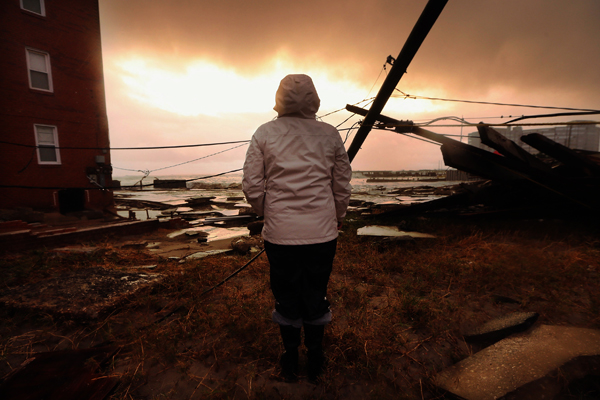 Chizuk #5 – The Power of Community

As we begin our new week almost two weeks since Sandy paid us an unwelcome visit, I can see a crack of light in the tunnel of murky
deluge that enveloped us.  More homes have had power restored, gasoline has begun to flow in more liberal quantities, the weather has gotten
warmer, and we are now slowly entering the rebuilding phase. There are still many communal and individual problems to be resolved; but with
time, they will be resolved. Yes, the tide is turning (please excuse the metaphor).
A major factor in the positive turn of events has been the communal leadership of the local Shuls, the local JCCs, Achiezer, the help of
other volunteer agencies, the help of some local politicians, and the incredible work of dedicated individuals who have tirelessly devoted
themselves to the afflicted communities, families, and individuals.  This leads me to a simple point–the power of communal responsibility.
We are so fortunate to be a part of a great community that services its members through good times and challenging times.
This past Shabbos we read that Avraham was blessed in his old age ‘bakol’, which translates to “everything”. The commentaries debate what ‘bakol’
means in a deeper sense. Some say he also had a daughter who was called, ‘Bakol’. Some say that in numerology, ‘bakol’ (bais = 2 ; kaf
= 20; lamed = 30) totals 52 which is the numerical value of ‘ben’ (bais = 2; nun = 50). ‘Ben’ means son and it means that having
Yitzchok means that Avraham had everything he wanted from life.  Some say that ‘kol’ is a code for Eretz Yisrael, bris milah, and the
capacity to dispense blessings. I would like to suggest that ‘bakol’, everything, describes a state of mind that Avraham was blessed with in
life. He was always happy with his lot. He always felt that he had ‘kol’ everything.
I think that that is exactly the way we should think. We have everything!  We are alive, we survived Sandy, no one was seriously hurt
in our community, we have our families, our friends, and we live in a great community! I grew up in a small Shul and never had a real sense
of community in a holistic way until I moved to Woodmere / The Five Towns. We have Shuls, Minyanim, an Eruv, a Mikvah, a Vaad Hakashrus, a
Chevra Kadisha, Bikur Cholim, Chesed Committees, and charity funds.   And now we have SANDY relief efforts. We really have everything. Just
like Avraham, we are blessed ‘bakol’, with everything.
Steve Savitsky, the immediate past president and current chairman of the board of the OU, told me the following story as we were touring
the Five Towns / Rockaway community last week with an OU delegation.  “Several years ago while I was sitting on a plane and learning my daf
yomi, I noticed that the man sitting next to me was looking over my shoulder to see what I was doing. I looked up at him and asked what
was so intriguing. He said he was Jewish and was curious to see what I was studying. I told him about the Talmud and we had a lovely
conversation about Judaism. He told me he was a reform Jew but really knew very little about the Torah. Then he perked up and said , ‘I
forgot to introduce myself to you’. He told me his name was Bruce Katz from New Orleans and he was quite well known as he is the weatherman
on Eyewitness News.”
“He then told me me something I will never forget.  At the time of hurricane Katrina, he was there before, during and after the
hurricane. There are about 10,000 Jews in New Orleans and as soon as the threat of the hurricane was evident, every Jewish organization
both locally, nationally and internationally was in New Orleans to take care of those 10.000 Jews. They moved them to safe places! Jews
were taken to Houston, Memphis and other parts of Louisiana. They kept a record of each person. No one was abandoned. Every Jew felt like a
prince and a princess. They felt loved and cared for just because they were a Jew. The other people were sent to the super dome and treated
like homeless people, without enough food, clothing and safety. There were murders, robberies and rapes. And yet each Jew was shown kindness
and love reserved for royalty. Then he said this sentence: I WAS NEVER MORE PROUD TO BE A JEW THAN DURING HURRICANE KATRINA.
I think about him often but never more than this week when every Jew became a member of the royal family– ‘me ke’amcha yisrael’. “
And that, my friends, is ‘bakol’, with everything.  The Power of Community.  The power of the Jewish community. The power of our
community locally and all over the country. Help is pouring in from all over NYC and from communities along the east coast to the west
coast and from north to south. This weekend we put up a poster board in the Young Israel of Woodmere of tens of letters of solidarity sent
to us from Jewish children in Eli and Elkanah in Israel. What a blessing it is to get a bracha from pure and innocent Jewish children
(even if their common message was that it is time for all of us to move to Israel). We are so blessed, and we should feel so empowered by
the privilege to be a part of the oldest nation on this earth, ‘am Yisrael’.
on behalf of Rabbi Hershel Billet