We begin with this: over the decades, the heylige Ois has had the pleasure of being in attendance at many a bris -hundreds, if not more- but never one as filled with emotion and gratitude to the RBSO as at the bris of Rafael Chaim Klein, born to Bonnie and Dan Klein. Not many dry eyes -if any- as Dan spoke. A big mazel tov to Bonnie and Dan. Mazel tov to the very excited grandparents, Shevy and Richie Cooperberg (Bonnie’s parents) on this great simcha in their family and to their entire extended family. Mazel tov as well to Dan’s parents and to his extended family. May Rafael Chaim bring his parents, grandparents and both extended families only joy and nachas and may he grow up to be as strong as Shimson.

According to exercise.com (a real site), exercise for the purpose of training to increase strength, speed, and endurance can be traced back to ancient Greece around 600 B.C. and these factoids: Bodybuilding first emerged a while before more structured exercise routines for the average person. It was not until the mid-20th century that regular exercise as a means to improve health began to become mainstream. The first gymnasiums in history were dated over 3000 years ago, in ancient Persia, where they were known as Zurkhaneh, as areas that encouraged physical fitness. But gyms formally came into existence in ancient Greece. The word ‘gymnasium’ is derived from the Greek word ‘gymnos’, which means naked. Vaudeville-strongman-turned-fitness-entrepreneur Hippolyte Triat, a Frenchman, is usually credited with being the first to open commercial gyms, the first in Brussels, and then in Paris in the late 1840s. and now you know. Ober, the questions are azoy: why are we leading with information on exercise and how is this information at all related to our Parsha, the penultimate in the heylige Toirah? Let’s find out.

After a short break to cleanse ourselves of the myriad sins we committed in the past year –Yom Kippur does that- the heylige Shabbis is here again, and this week, we’ll have the pleasure mamish, of hearing Parshas Ha’azinu (which means “listen”). Listening is exactly what the Ois did this past Sunday at the Klein Bris and if anyone wants to be moved to tears, get your hands on the speech given and words shared by avi-haben (father of the child), Dan Klein. Wow!

Ha’azinu, with its 52 pisukim is the 3rd shortest parsha, a relief mamish after a long and kimat all-day event on Yom Kippur. Ha’azinu and the last parsha in the heylige Toirah –V’zois Habrocho which we’ll hear on Simchas Toirah, contain Moishe’s last words to the Yiddin before the RBSO carried out His sentence of not allowing Moishe to lead the Yiddin into the Promised Land. Seemingly it’s not a very good idea to anger the RBSO: He has a long memory especially for tzadikim (the righteous) that make errors of judgment. We are taught that the RBSO punishes those good guys for the tiniest of infractions. That’s mamish givaldige news and a great relief to most of you; are you a Tzadik?! Most of us barely skated by Yom Kippur as we read the long list of sins and admissions of guilt -tiny and not so- we committed over the past year.  Are we safer being bad?

More good news:  if you’re reading this week’s review, the RBSO has spared you. You have made it past Yom Kippur and the RBSO decided to give you a pass and yet another chance to mend your ways. Avada we should be thankful.

We are just about done learning the entire heylige Toirah and on Simchas Toirah we will begin all over again. Sefer Bereishis and its juicy content is mamish around the corner. The bottom line: man -and women too- have been bad from day one of their creations (they were creating don day six of creation). Though all 613 mitzvis have previously been taught and delivered -the last two just this past week- and with them -as we have discussed many, many times- myriad business opportunities, it could well be argued that Parshas Ha’azenu gave birth to one of the biggest industries of them all.  And it’s not even by way of mitzvah exploitation. What is this gisheft?

This week, as you read Moishe’s swan song during which he poetically reviews the tumultuous relationship between RBSO and the Yiddin –especially when they become successful– and foretells of future rocky times ahead between the RBSO and his Chosen People- we need to pay special attention to one posik of nine words that the goyim -and eventually the Yiddin- learned how to properly exploit. It took many generations and it so happens that the goyim chapped this first; the Yiddin -mistama slowed down by eating cake, challah, kugil -to include potato, lokshen and some salt & pepper- and other staples of their diets- were slow on the implications of Moishe’s words. The good news: they have since caught on. These nine words gave birth to the entire fitness craze which in our times, has become a multibillion-dollar business gisheft. And we speak of the entire business of diet and exercise; more below. 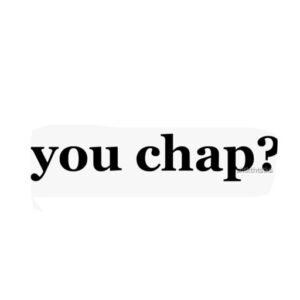 It’s taka emes that Ha’azenu is most well-known for the way the words are written, in song like poetry, and read in shuls with a particular cantillation, ober Ha’azenu is also known as the parsha that many yeshiva boys were required to memorize in its entirety at an early age. Why, ver veyst? Lommer lernin (let’s learn) posik tes vuv (verse 15) where Moishe warns the Yiddin not to get too fat.

So Jeshurun grew fat and kicked—You grew fat and gross and coarse. They forsook the G-d who made them. And spurned the Rock of their support. What? What does this mean?

Says Rav Kook, azoy: When they are satiated, they rebel. You find the same with the people of the generation of the flood, who rebelled against G-d only from food, drink, and tranquility…When Yisrael (the Yiddin) enter the Land, they are destined to rebel out of eating and drinking, and out of tranquility, as it says, “For I shall bring them to the Land that I swore to their forefathers, which flows with milk and honey, but they will eat, be sated, and grow fat, and turn to the gods of others.” What Moishe was saying was this:  When you enter the Land, take care that you do not rebel against G-d out of eating, drinking, and tranquility, as it says, “Lest you eat and be satisfied.” 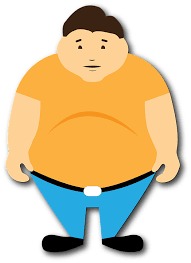 Who got fat? “Then Yeshurun became fat and kicked…Whenever you became fat, you became obese and overwhelmed by fat.” And the question is this: Who is this person Yishurun and how fat or obese was he? Why was Moishe singling out one nebech fat and obese person?  Is that nice? Especially after Yom Kippur? Shoin, avada we cannot believe that Moishe would make choizek (poke fun) of one single person over his weight and taka our rabbis have suggested that pshat is different. Though this is the first place in the entire heylige Toirah that we will encounter the word Yishurun -seemingly the word is meant to describe all the Yiddin as a nation. Veyst zich ois (seemingly), they all became fat! And obese! What Moishe meant to say was that the Yiddin would become fat with material wealth and riches after they were to enter the land. As a result of being fat and obese, they would believe in their own success. He foretold of a time when the Yiddin will abandon their faith in the RSBO’s mastery of the world.

Ober, the other umois-ho’oilom (the goyim) -not at all versed in chapping pshat beyond the simple meaning of the words and without access to medrish and other sources we rely on – only understood the words literally.  They decided that the heylige Toirah abhors fat and obesity.  What next? They, including early visionaries like Jack LaLane, Lucille Powers and others, chapped that pshat was that people needed to exercise and trim down. Fat is not good. Shoin, eventually this gave birth to the entire fitness craze. Larger and smaller gyms, Weight Watchers, Nutri-Systems and others would follow and today we have personal trainers, fat burner pills, protein bars and other zachin including sophisticated machinery that can help trim people down. As an aside, the Ois has recently come across just such technology and machinery; it mamish works and if anyone wants more information, contact me.

We also have hundreds of videos featuring halb-nakete- mydlich (scantily dressed girls) with bodies to kill exercising like fiends. These are meant io inspire the people, to motivate them. And taka they work: men taka get motivated, if you chap but they don’t really get to chap.  Men believe that if they follow these videos, they too can be with those mydlich. A nechtiger-tug (fat chance, haha), never gon-na happen).  Veyter. 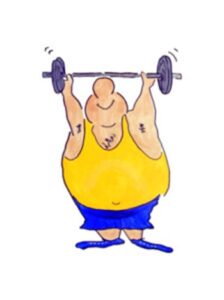 Also, in this week’s parsha, the heylige Toirah will tell us that the Yiddin will become engaged in very sinful practices and that the RBSO will respond with very serious measures.  Ober, as we have discussed many times over the years, ultimately, the RBSO -after schmeising us silly- will redeem the Yiddin and bring the world to its perfect state.  Asks ober that Ramban azoy: Generally, the heylige Toirah predicts that misfortune will follow only if the Yiddin act in sinful ways and promises blessings when they act properly. We never find the Toirah stating as a matter of fact that the Yiddin will definitely follow a sinful course.  How is it, and why is it that Moishe makes a prediction about the Yiddin’s behavior as a fait accompli? Did Moishe have insider information?

Ober the Ramban answers his own question by quoting from the parsha.  Says the heylige Toirah (Devorim 31:21) azoy: “Because I know what your evil inclination does today before I bring you into the Promised Land.”  Herein lies the answer as to Moishe’s prediction with a degree of certitude.  Moishe chapped that the Yiddin’s less than admirable behavior thus far was an indication of their future behavior. Imperfections in their character would inevitably become exposed in the future.

The bottom line: Moishe was saying so shtark (harshly) azoy: Although no specific generation will necessarily fall into sin, sinfulness will inevitably occur at some point.  Let’s remember the great power of the yetzer hora.  We are not a match.  An imperfect seed cannot produce a perfect tree.

And sadly Raboyseyee, Moishe’s words, though veiled at the time, taka came to pass. The history of the Yiddin taka includes times of abundance and surplus coupled mamish with a decline in morality.  Shoin, let’s not forget that a person’s yetzer hora avada grows as his riches increase and as discussed over these last few weeks, he, the yetzer horo yetzer hora, is difficult to tame. Another bottom line: lets us recall that we are so programmed. Veyter.

Also in Ha’azenu, we will finally, after a few warnings from the RBSO, be saying goodbye to Moishe. The RBSO will instruct Moishe to ascend the mountain where he is to pass away mamish in the middle of the day. The RBSO will remind Moishe one more time why he was being punished and denied entry. The RBSO will remind Moishe that some time back, he, Moishe did not listen to the RBSO’s instructions about how to use his shtekin (staff).  Instead of talking to the rock, Moishe instead, – as many do ad hayoim hazeh (until today)- grabbed his staff in his hands, and seemingly abused it. Many do that daily trying to gain entry, if you chap.  The bottom line: the RBSO has a long memory:  He does not ever forget.  He may look aside for a short or even long period of time, ober, one day, when you least expect it, He will remind you about such abuse.